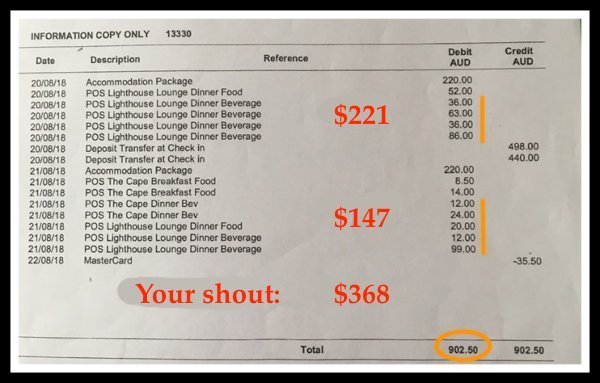 One of the big questions that hangs over the whole Warrnambool City Council credit card scandal is how many other cards were being used to eat, drink, and stay awake with endless coffees?

Tonight I can tell you that it does not stop with former tourism manager David McMahon.

In fact, my left rib tells me that we are just getting started.

While Mr McMahon ended up wandering down a crooked path, he was also – we must remember – spending thousands of dollars of ratepayers’ hard earned money on food, booze and takeaway coffees with the full approval of those in charge.

He was not the only one.

This is because the council’s secret credit card policy was so slack it allowed some council staff to spend up big on alcohol, food and their almost daily coffee run to Fishtales without fear of retribution.

And that is why we have a receipt like the one above.

It shows that in August last year, another WCC senior staff member attended a conference on the Mornington Peninsula and racked up $368 worth of drinks over two days.

This equals 40% of the total bill.

Toot, toot, all aboard! When there is a gravy train on the move, it is never short of passengers.

The person who racked up this receipt in August was, I believe, at the Cape Schanck conference held in July where more than $1600 was spent on Mr McMahon’s credit card on food and drinks.

This person was also part of a five-day trip to WA with Mr McMahon in October, where the infamous “tackle” was bought after 7pm on a Friday night.

And all of this travelling and boozing was going on behind the scenes while the council prepared its case to raise rates above the cap.

It is like the days of Versailles, with a select group of council insiders enjoying the party, while the majority of people in Warrnambool work their backsides off to make ends meet and are being belted with rate rises, fee rises and fine rises, because the council is going broke.

The credit card spending is just one part of the enormous waste that has gone on for a decade, but it is perhaps the most disgraceful, because it can’t be explained away as a mistake, or a misunderstanding, or from “circumstances beyond our control”.

It is pure greed, aided and abetted by a system that let us down.

Those council staff – and thankfully they are in the minority – who carved into eye fillet steaks, or who ordered another bottle of red, or another round of beers, or another glass of white wine, or a $4 coffee on their $120,000 salary – knew exactly what they were doing and they were allowed to do it, until last October when the shit hit the fan as a result of my FOI application that would eventually expose the whole rort.

It doesn’t matter if the money has since been repaid and I don’t know, in this particular case, if it has. (Once again, the council is not answering questions.)

And it doesn’t matter how the council now tries to spin it: it was just one rogue manager, discovered – miraculously – just a month before my FOI, all repaid, all tidied up, a mere blimp, just a “social media” storm…

None of that is true.

What matters it that we are exposing a culture that led us to the financial mess we are in today and for which we are paying dearly.

And all of those behind the rot have to be held accountable, wherever they may be today, including those who have since left Versailles and are now living in Coquenball mansion.

I am waiting to see what happens next with the council’s reporting to the authorities, its investigations and its reviews.

And I am waiting to see if South Coast MP Roma Britnell’s call today for an independent investigation is heeded by the Local Government Minister.

In the meantime, we press on with our own investigations and reporting and reviews.

Thanks to your contributions to the Tip Jar, I today lodged two more FOIs on credit card usage with the council.

The answers may take a long time to come, but it is worth the wait.

Thankyou so very much to those who have supported The Terrier with a contribution to the Tip Jar: this investigation is the Tip Jar at work. You can be part of it by clicking below.

6 thoughts on “On the gravy train, there are always plenty of passengers”