Imagine, for a moment, you meet some people at the pub for drinks on a Saturday night, then wander across the road for a $546 group dinner, then grab lunch the next day, and charge the whole thing back to your boss with virtually no questions asked.

I know, I know, it doesn’t happen.

And yet it does, because this was about the level of scrutiny by the Warrnambool City Council for the credit card held by its tourism manager, David McMahon.

As we know, Mr McMahon racked up more than $10,000 worth of spending on this card for gatherings, meals, drinks, coffees and the like over 18 months from March 2017 until October 2018.

Given this is ratepayers’ money, you would expect that every single line of this spending would be scrutinised, cross-checked and at least backed up by decent receipts itemising everything that was bought.

You might even expect a clear record of who was there (how many council staff/how many guests), why the event was held, and what benefit it was to the council.

From what I have learned through this in-depth investigation, this was rarely the case. 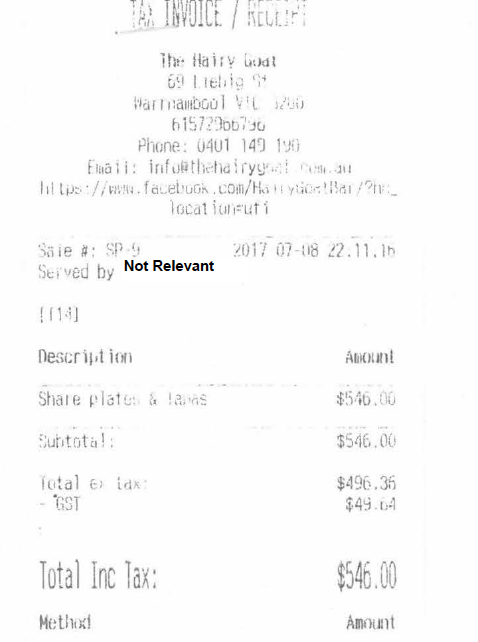 We all know that Mr McMahon has to spend money on tourism-type stuff, like meet and greets, events, working with journos, showing people around, all that sort of thing, but it is for this very reason that – surely – the level of scrutiny should be even greater than for a desk-bound council worker ordering boxes of staples and Sticky Notes.

And yet so much of the paperwork provided for this credit card is vague at best and non-existent at worst.

Let’s go back to the Saturday night example.

On Saturday, 9 July 2017, Mr McMahon spent $48 on a round of drinks at the Seanchai Irish Pub in Liebig St. From there, it appears the group moved over to the Hairy Goat where $546 was spent on tapas and share plates, but not one beverage, as part of a convivial evening that wound up after 10pm.

The next day, around 2.30pm, Mr McMahon’s card spent $40 at the Cactus Jam Mexican restaurant. 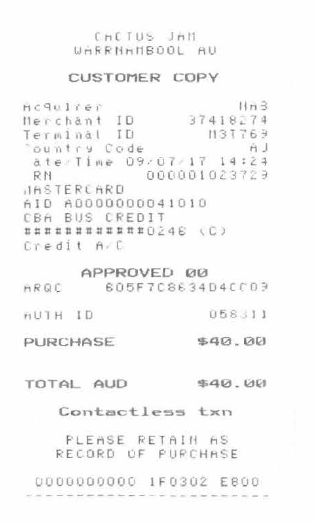 That is more than $600 worth of ratepayers’ money literally chewed up in less than 24 hours at three different locations and yet there is just one itemised receipt – from the pub – and no indication of who was involved, or the reason, or what was the benefit to council.

For the WCC internal record system, these outings were simply described by Mr McMahon as  “promotions/meals” or “promotions/beverages”. 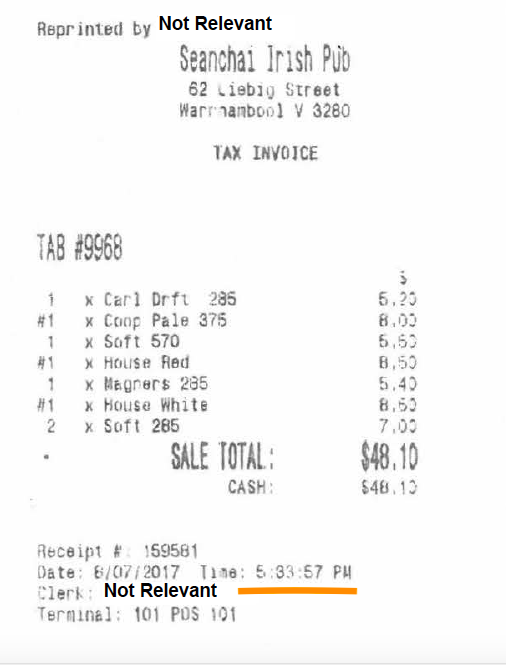 Here are more examples from documents released through Freedom of Information:

Mr McMahon, as per council policy, provided a stat dec that said the goods were cleaning products for a shuttle bus. This may be so, but on the council’s internal record Mr McMahon described the groceries as “stationery”.

So, was it pens or Pine O Cleen? Biros or bleach? Who knows? Who cares? We do. 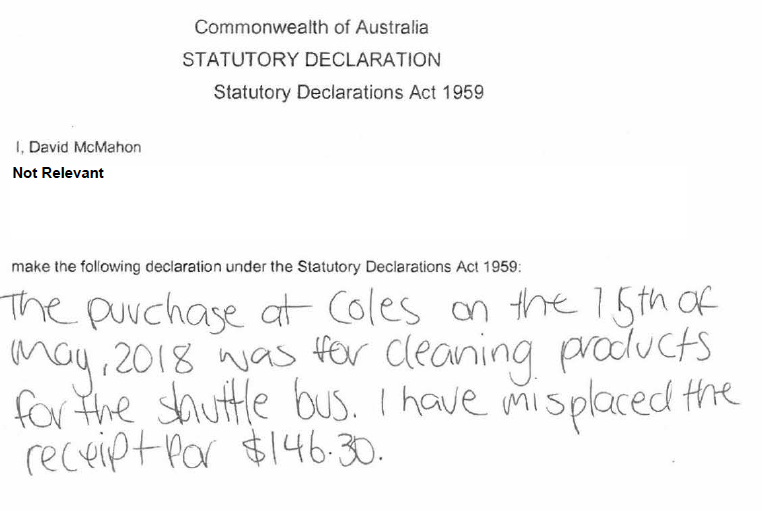 On Saturday, 12 May 2018, a group of people travelled on the Warrnambool Westcoaster steam train, which ran from Melbourne to Warrnambool and back again, arriving in Melbourne on the Saturday night.

The group spent $195 on meals and drinks – the train was fully licensed, but we don’t know if these drinks included alcohol, because apparently the Westcoaster could not provide a receipt, so Mr McMahon signed another stat dec.

On Monday, 9 July 2018, Mr McMahon’s card was used to pay for tickets into Sovereign Hill at a cost of $149.60. The tickets were for two adults and a child who, I suspect, was enjoying the school holidays.

The only explanation given is “Vol Famil”, which is shorthand for taking a person (in this case, apparently a volunteer), to a place they have not been before. Why was a kid there? What came out of the visit? 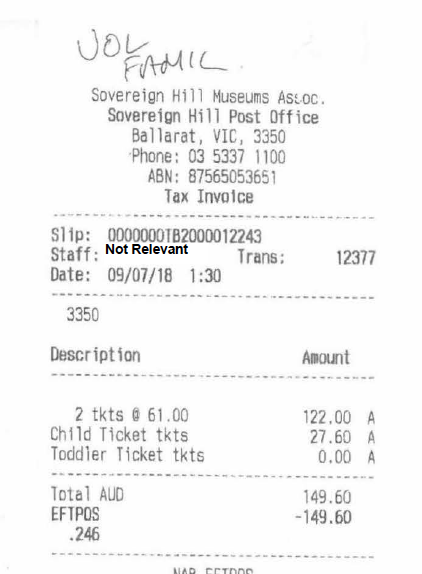 On Monday, 3 September 2018, a very precise $434.90 was spent on hiring a room at the Lady Bay Resort with no further explanation provided. Was there an event? Why use the Lady Bay and not a council room? The WCC is yet to explain.

And this is just a sample. 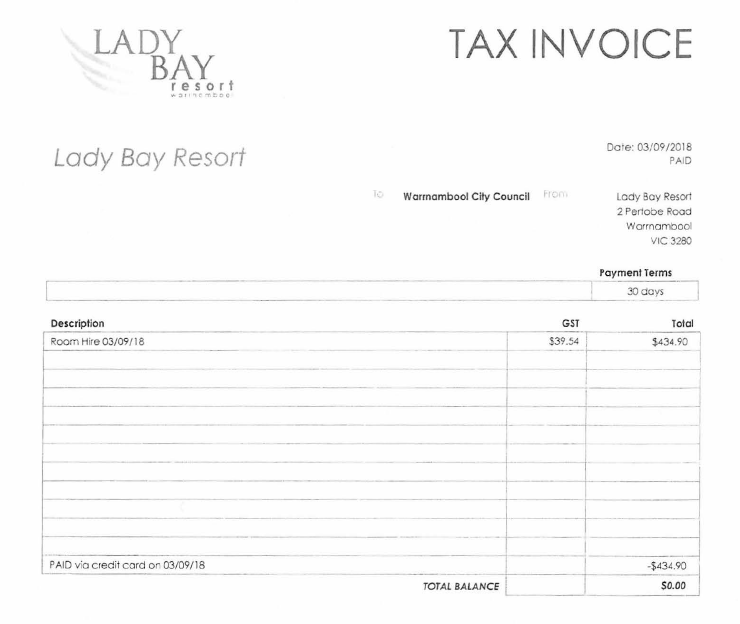 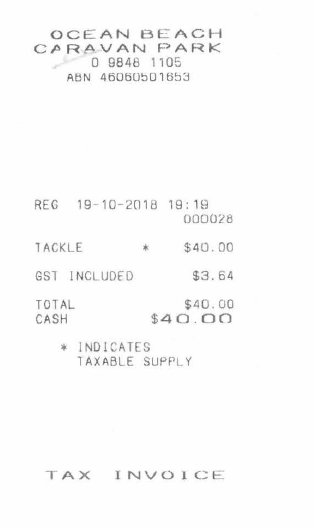 All of the above may be 100% justifiable, but the record keeping is appalling.

Despite this, it was all signed off by Mr McMahon’s superiors and paid for by you.

I asked the council if such receipts were considered acceptable, because it is one thing to keep a receipt for accounting purposes, and quite another to keep records for accountability.

These are two different things, as the Victorian Auditor General recently pointed out very clearly in his report on corruption control within councils:

“Councils are accountable to the communities they serve and the ratepayers who fund their services,” he wrote.

At the end of the day, it is about trust and, for ratepayers, that has been severely shaken.

The council’s answers via a spokesman are in full below.

Next: I have two, final stories to come this week as I build a picture here. Tomorrow night will be the first of those.

Q: The documentation includes several un-itemised receipts and at least one receipt written retrospectively. How do these receipts conform to the council’s credit card or procurement policy?

Tax invoices for taxable sales of less than $1,000 must include enough information to clearly determine the following seven details:

that the document is intended to be a tax invoice

the date the invoice was issued

a brief description of the items sold, including the quantity (if applicable) and the price

the GST amount (if any) payable – this can be shown separately or, if the GST amount is exactly one-eleventh of the total price, such as a statement which says ‘Total price includes GST’

A receipt may be sought and obtained retrospectively for the reconciliation of credit card accounts.

Q: What is the council policy in regard to café or restaurant meals being purchased by staff at weekends, other than when travelling on official council business?

Some roles at the Council require work after hours and/or at weekends. These purchases would need to comply with Council’s reimbursement policies.

Q: What is the council policy on the use of a corporate credit card to purchase alcohol?

3 thoughts on “WCC credit cards: from tapas to tackle, where is the scrutiny?”