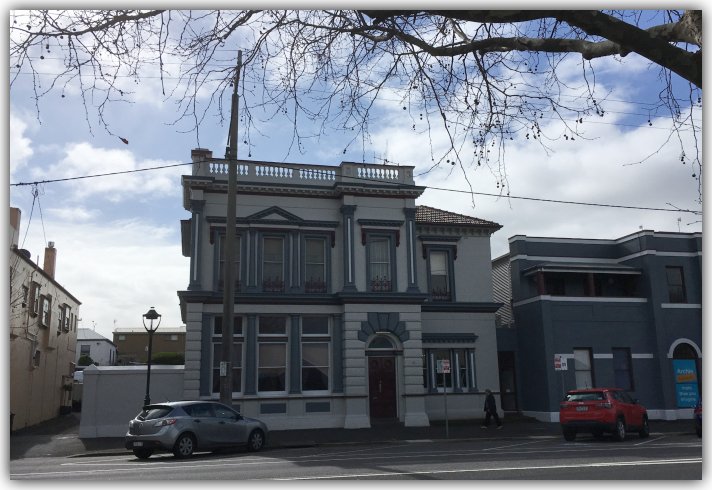 Almost a year ago, The Terrier revealed a senior staff member of the Warrnambool City Council had been living in a council-owned, CBD apartment for more than 30 years.

Since then, I have been trying to get a copy of the lease.

As it turns out, there wasn’t one: the deal was based on a handshake deal.

This handshake deal – a verbal lease agreement – apparently covered everything from annual rental reviews, to repairs and the $12,000 replacement of a garage.

The council-owned apartment in question is in the old bank building at 130 Timor St, which is part of the Archie Graham complex and where the staff member has lived since 1987.

According to the council responses to my questions last July and August, the apartment is leased for $190 a week, with the rent reviewed annually.

Any repairs to the property were also included in the rental agreement, it said, including a $12,000 garage that was built for the tenant mid-last year after an old garage was demolished as part of larger works at Archie Graham.

(To get the full background, you can find my earlier stories here and here and here. You can find the council’s original response and justification for the ongoing lease here. It essentially argues that because the property is linked to the Archie Graham complex, it would be difficult to rent out to most people.)

Given the prime property is owned by the people of Warrnambool, I was keen to see a copy of the lease agreement that had covered its use for three decades.

The council refused to supply a copy, so last October I lodged a Freedom of Information* application and in December last year was given a copy of a lease.

I lodged a second FOI application, this time for a copy of the lease that was in place before 1 July 2018 and that is when things shifted from the unusual to the unbelievable.

This FOI revealed that there was no written lease in place for a public building, for 30 years, before the one I was given that shows a start date of 1 July 2018.

To quote the FOI officer: “I have conducted a thorough and diligent search for the document you have requested, however as a result of gaining internal advice I have been informed that the document does not exist.”

“The reason for the nonexistence of the document is that prior to the current written lease, the preceding lease was verbal,” she wrote.

Verbal lease agreements are not illegal, but for long-term leases they are rare and I would suggest in government they are virtually non-existent.

The only time a verbal lease might be used in the public service is for short-term rentals, say up to three months, while a new staff member finds their own accommodation.

When it comes to a council lease of more than 30 years, for a CBD apartment owned by the public, you would assume a written lease would be mandatory.

I doubt you would find any other council among the 79 in Victoria that would have a similar, handshake deal in place with a council staff member, or anybody else for that matter.

In fact, when I first wrote about this apartment last year, I couldn’t find any other council that rented long-term accommodation to a staff member unless it was part of their contract, like a caravan park caretaker.

So it begs the question of who at the WCC started this handshake deal in 1987?

And who has since agreed to it continuing?

Most importantly, how did the successive WCC officers in charge of managing council properties ever keep track of it?

Were the annual rent reviews and any increases jotted down on a Post-it note?

And what about responsibility for repairs and replacements – including the $12,000 garage – was that documented in writing? Was there an understanding about the use of power, gas and water? How about a bond?

Apparently all of this detail was kept in somebody’s head.

This on-going, open-ended, verbal-only arrangement came to an end last July, when a written, 12-month lease was finally put in place, which opens up another whole storyline.

To be blunt, I believe how this written lease suddenly came about smells more than a fish-cleaning bin at the Hopkins River on a hot summer’s day.

That is the next instalment and you can read it tomorrow night.

This story is the Terrier Tip Jar at work. All of the above is now public because of a series of Freedom of Information applications that supporters of The Terrier have funded. To be part of it, click below: