Three interesting things and a question:

Titibit #1: If you were wondering why a series of red bars have suddenly started popping up on intersections around the CBD, here’s the answer: the introduction of a 30kph speed limit.

The new, slower speed limit was one of the many things bundled into the now $18 million upgrade of Liebig St but, as far as I can see, it hasn’t been mentioned or discussed widely since it was first raised as an idea for Liebig St in 2014.

From what I have found, Warrnambool is the only place in Victoria outside certain parts of Melbourne to introduce a 30kph zone and the idea, of course, is to slow the traffic down to make life safer for pedestrians.

There is nothing wrong with that concept, but given the amount of traffic controls now in place in Liebig St – with more zebra crossings, roundabouts and speed humps than you can count – is it really necessary?

And is it necessary to extend it from Liebig St to other parts of the CBD where the limit is 50kph?

I haven’t seen any statistics on the number of pedestrian injuries around Kepler St/Raglan Pde, for example, or Banyan/Timor St, which are just two of the intersections now getting the red stripe treatment.

Driving at 30kph really is snail’s pace – it’s 10kph slower than for school zones – and I can’t see people sticking to it outside of the main street where the speed is already restricted by design.

Titbit #2: The draft Warrnambool City Council budget/s and its submission to the Essential Services Commission to ask for a 4.5% rate rise contains so many gems, I am not sure where to start, but I will list a few during this week, starting from today.

It is expected to run at a loss of around $750,000 each year for the next three years, which is $100k more than anticipated and getting close to double the losses of around 10 years ago.

This is eye watering.

By the way, it is worth mentioning that Colac Shire Council is raising its rates by a mere .5% this year. They were thinking of going for 2%, the same as last year, but that was knocked back by a majority of councillors. It is also worth mentioning, again, that out of 79 councils in Victoria, only two are applying to break the rate cap and we are one of them.

No, they are not saved, yet, because the councillors deferred making a decision so they could – once again with feeling – look at the whole Banyan St streetscape and – once again – try to find out how much it would cost to plant coastal banksias down the southern end because Infrastructure head Scott Cavanagh had no real idea.

Good grief, the people of southern Banyan St have been waiting for five years to get this sorted. Five years.

Worryingly, as part of the debate Cr David Owen – he who loves trees – described the two Moreton Bay figs as “freaks” because of their bad pruning and said should be removed.

Why, as has been said elsewhere, do councillors ignore most petitions unless they give them the answer they wanted in the first place? 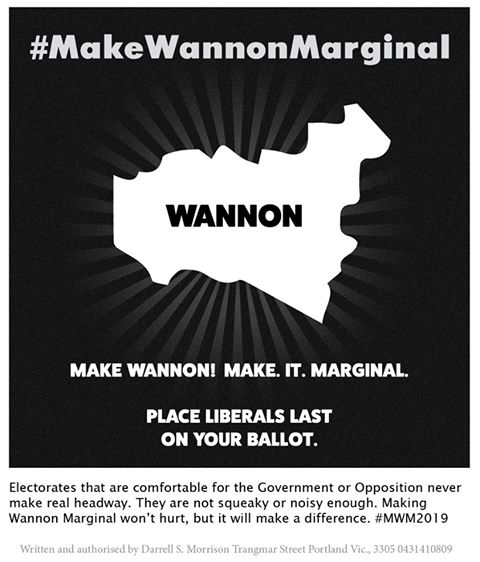 Speaking of petitions, how ironic that the WCC is part of a petition for better roads in our area.

Judging by the years of neglect in road funding so far, the council might find its own petition efforts are also ignored.

Unless…unless…we will actually make Wannon a marginal seat at the federal election on May 18.

Are we brave enough?

If you would like to see The Terrier keep digging up, sniffing out and chewing on local issues, please consider throwing something in the tip jar.