It’s been a long time since I have written about Lyndoch Living – our other high-profile public institution which, in recent years, has become an increasingly closed shop – but with its AGM next week, the time is right to dive back in.

I do so under the tight collar of yet another legal action against The Terrier by Lyndoch Living – my third in 12 months.

This one has been running for some weeks now and I can’t tell you much more than that…for legal reasons.

I often wonder how much money has been spent by Lyndoch on hiring the classy Collins St law firm, K & L Gates, to go after The Terrier?

Perhaps this could be one of the questions at the AGM next Tuesday at 4pm?

Another, more pressing question I planned to ask concerned the $2 million budget blowout for the Swinton Wing upgrade and expansion which had its online, virtual opening in September.

The upgrade was reportedly budgeted at $11 million, but came in at $13 million.

Where did the extra $2 million go?

Another important question I was keen to raise related to the recent fire sale of the Waterfront Living swish apartments which, as long-term readers would know, failed to fully sell since being built in 2014.

This is largely because – according to real estate watchers – those on the south side of the “Rolfanna” apartment complex were in the shade and over-priced.

A bunch of smaller, less salubrious residential units next to “Rolfanna” are for sale for as little as $185,000.

Did Lyndoch need to liquidate some fast cash to move on to the next part of its $100 million masterplan?

Except I won’t be asking questions at the AGM, and neither can you.

That’s because the AGM will be online via Zoom and – unlike the virtual grand opening of Swinton Wing – is strictly invitation only and we haven’t been invited.

I have contacted several families of residents to see if they have been invited and no, they didn’t even know the date of the AGM, which once-upon-a-time was advertised widely and weeks in advance.

[I learned the date just last week, after a couple of emails to the Lyndoch media unit.]

More importantly, we don’t get to ask any questions next Tuesday and – I suspect – that is the whole point. 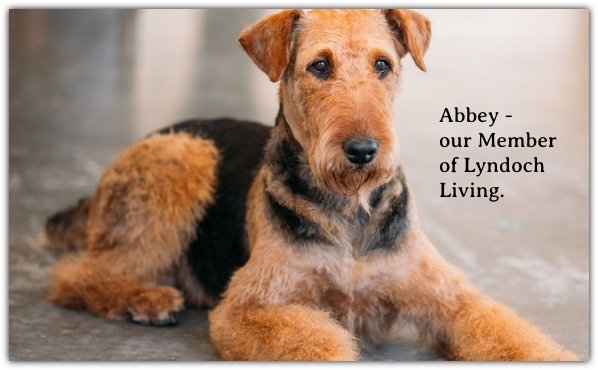 Those who have been following this Lyndoch story from the beginning (last October), know that Lyndoch – despite being community owned and built on the generosity and support of locals – has changed to a Company Limited by Guarantee and is now a very tight shop.

At last count, it had just 16 members: nine board members, the Lyndoch executive and two life members, so every member is from within Lyndoch itself.

As long-term readers know, everyone from the wider community who has applied to be a member these past 12 months, has been rejected for what we might now call the “Peter Schneider clause“, no reason.

Even Vicki Jellie AM and retired lawyer Lynn Hudson didn’t make the cut.

In this climate of litigation, frustration and obfuscation, I feel we have only one choice and that is to appoint our own Member Of Lyndoch (External) to represent us.

So meet Abbey the Airedale Terrier, also known as a Waterside Terrier (which seems fitting), a breed known for being intelligent, outgoing, alert, confident, friendly and….courageous.

Abbey is just what we need in the kennel and she will be sniffing out some important issues in the lead-up to the Lyndoch AGM that still require answers.

If you would like to support the work of The Terrier, please visit the tip jar.