Wow, that is called shooting to the top after just three years on the board.

Ms Cassidy is second in charge on the board of the largest aged care home in Warrnambool and no doubt primed to replace President/chair Kerry Nelson when she retires.

But on my reckoning, Ms Cassidy is one of them and WCC colleague City Growth Manager Andrew Paton is the other.

Abbey, the Unofficial Member of Lyndoch representing the broader community, had hoped to apply.

Of course she had no hope, because to become a board member, you have to first be a member – approved by the board.

At last count, there are no members of Lyndoch Living who are not already connected to Lyndoch.

As I have written before, this is because ever since Lyndoch changed in 2018 from an association to a Company Limited by Guarantee, it runs pretty much as a closed shop.

Board members are now appointed by invitation to what is a volunteer position. 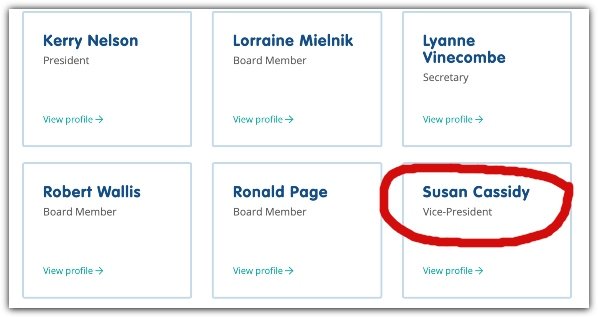 Not only did Abbey have to scale that impossible hurdle, she had to unseat either Mr Paton or Ms Cassidy and they are going nowhere fast.

Because Ms Cassidy and Mr Paton have another special job inside Lyndoch and that is as co-directors of Lyndoch Healthcare Pty Ltd.

Lyndoch Healthcare Pty Ltd is the company that oversees the Warrnambool Medical Clinic which was bought by Lyndoch last year for $1.3 million and will be relocated to Lyndoch as part of the $100 million masterplan.

Here is question for the AGM next Tuesday: are the directors of Lyndoch Healthcare Pty Ltd paid? And if so, how much? And did the board select who became directors?

I hate to break it to Abbey, but I don’t think she is going to be elected to the board as a fresh face and neither, most likely, is anybody else.

[The Lyndoch Living AGM is next Tuesday at 4pm and will be Zoomed live by invitation only. Lyndoch has said a recording of the event will be uploaded to its website.]