News today about the ructions within the local Liberal Party branch was interesting on all sorts of levels, including the fact it exposes – yet again – the thick ties between the Warrnambool City Council and the Warrnambool Racing Club.

Let’s check the count so far. If you have been reading The Terrier:

Cr  Kylie Gatson: We already know that Cr Kylie Gaston ran for the Labor Party at the last state election and Labor Racing Minister Martin Pakula was the main force behind ensuring the Warrnambool Racing Club got what it wanted from the council in accessing Levy’s beach for large-scale racehorse training

Cr Peter Hulin: We already know that Cr Hulin, who supports the Levy’s move, was a former Liberal Party member but handed out how-to-vote cards at the last state election for former MP and racehorse owner James Purcell, whose son, Aaron, is a local racehorse trainer.

Cr Sue Cassidy: We already know Cr Cassidy, who supports the Levy’s move, is married to David Cassidy who operates sign company, Cassign, that sponsors races at the Warrnambool Racing Club. Liberal Party member Peter Herbert, the mayor’s brother, is a mate of David’s and not very happy about the “plover lovers” – as he likes to call them – who are opposed to racehorse training at Levy’s because the endangered Hooded Plover nests there.

And now, in today’s story, we have Mayor Herbert also turning up as a rusted-on member of the Liberal Party where the chairman of the Warrnambool Racing Club, Nick Rule, is a significant player.

In his maiden speech in Federal Parliament, Mr Tehan thanked Mr Rule for being part of the Liberal fundraising team that saw him elected to the seat of Wannon.

Now Mr Rule, as chairman of the Warrnambool Racing Club, has to deal directly with the council – and Mayor Herbert in particular – to get the approvals that are still required to allow racehorse training at Levy’s Beach.

The fact they already share a connection, through the local Liberal Party branch, might explain the letter sent by Mr Rule to the Mayor on January 16 this year.

This was an important letter.

It was asking the council to provide consent for the racehorse training and assurances to the Environment Minister that this was in line with all coastal and marine management plans and policies.

It also asked for the council executive staff to be given the power to issue training licences.

These were both “critical” requirements, Mr Rule said.

Despite the importance of this letter, Mr Rule didn’t even bother to sign it or put it on Warrnambool Racing Club letterhead.

It arrived, unsigned, from Hammonds Paints, where he is managing director.

There is such a lack of formality, such an expectation of being heard without having to be all official about it, that all that is missing is “maaaaaatttteeeee”. (You can see the full letter here). 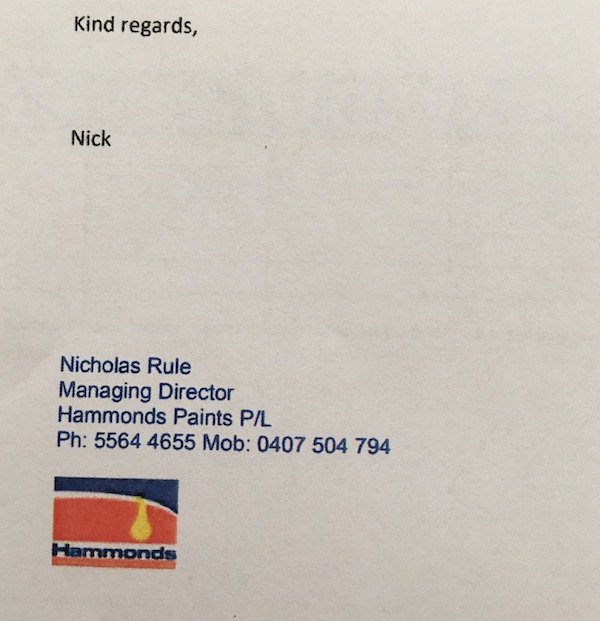 Lo and behold, the letter was tabled and dealt with by the council just 17 days after it arrived. (By contrast, the residents in south Banyan St lobbying to have street trees planted have been waiting about four years.)

Mr Rule wrote a letter to Mr Herbert on December 10 – this time it was signed and on WRC letterhead – saying the club had asked the Planning Minister to change the planning rules so racehorses could train at Levy’s. If the change went ahead, the club wanted the council’s support as well, the letter said.

“This is a matter of great urgency,” Mr Rule wrote.

I remember, in 2014, I needed council permission to place a scissor lift and five witches hats near the Robert Ullman whale mural, in East Warrnambool, which was being restored over a weekend.

The little permit took more than a fortnight to be processed.

Like the people waiting for their street trees in Banyan St, I obviously don’t have the right connections.

7 thoughts on “Hi Tony, maaaaaate: the ties between the WCC and racing”