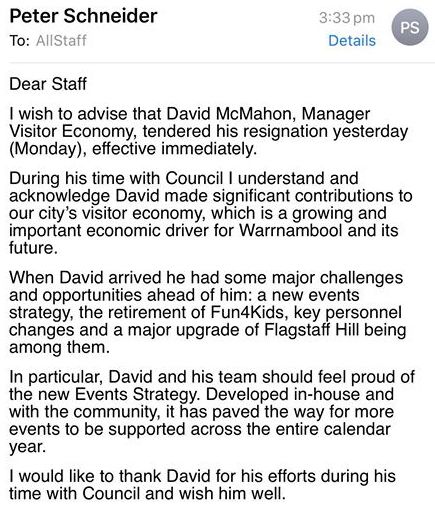 A REMINDER. Mayor Tony Herbert was on ABC radio yesterday (8/10/19) and pondered why the WCC whistleblowers didn’t just wander in and talk to CEO Peter Schneider about their concerns.

Let me answer that question by starting with this text message (pictured).

This message was sent to all Warrnambool City Council staff when former tourism chief David McMahon resigned in mid July.

It was sent by CEO Peter Schneider: the new guy, the one who brought great hopes of a clean slate, a fresh start, a new way of doing things.

In it, the CEO praises Mr McMahon, thanks him for his efforts and wishes him well.

Mr McMahon quit because his gross misuse of ratepayers’ money had been exposed publicly here.

Mr McMahon was also a foul-mouthed bully and his behaviour, for which he was never called to account by his superiors, broke a lot of people.

There were people within council who knew about both of these things.

Yet, until July 16, Mr McMahon kept his job; unscathed and intact.

And when he did quit, he was praised by the new man in charge – the boss.

For many council staff, this was gutting.

Perhaps Mr Schneider now regrets this message, but wait, there is more, there always is.

From the minute I published my stories about the credit card abuse, the council has been trying to uncover my sources. They want to flush out and punish anyone who told the truth.

This is happening under Mr Schneider’s watch.

And still the Mayor and CEO wonder why nobody is coming to them with their allegations, concerns and fears.

And, right now, there is none.

Restoring trust, as Ratepayers Victoria has made clear, is the challenge.

The next few months will be telling.