Oh the battle over the sacking of the Warrnambool City Council boss Peter Schneider is turning into a dog fight.

The warning relates to a written media statement that was given to the local newspaper by Cr Herbert last month, but not published.

Cr Herbert prepared the 500-word statement with Councillors Peter Sycopoulis and Robert Anderson, setting out what they allege happened when their fellow councillors sought legal advice on the dumping of Mr Schneider.

Having learned of the statement, Crs Kylie Gaston, Mike Neoh, Sue Cassidy and David Owen shot an email to Crs Herbert, Sycopoulis and Anderson, describing the account as “misleading and false” and “a complete distortion of the truth”.

“We will seek legal action if there is any defamation of our characters or false information published anywhere,” the four councillors wrote.

I asked all four councillors yesterday for a comment on this legal threat and why they felt it was necessary.

“It is up to the media to decide what is inflammatory or not and if people are defamed it is their right to take recourse,” was the joint response.

It’s hard to believe that only a year ago, Cr Herbert was elected Mayor for a second term on the votes of Crs Neoh, Gaston and Owen.

At that time, it was Cr Cassidy shooting barbs across the room at Crs Gaston and Owen for switching sides.

What a poisoned pit the chamber has become since then.

The media statement by the three councillors has not seen the light of day, but it referred to an email that, in the name of public interest, you can download here.  (I have removed names irrelevant to the content.) 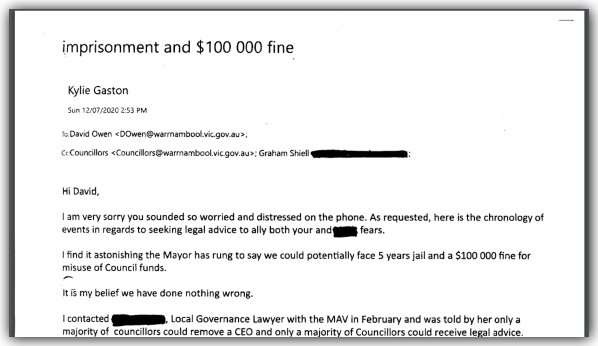 The email, which is not marked confidential, was sent by Cr Gaston to Cr Owen and cc-ed to all councillors on 12 July – the day before the council held its special meeting to sack Mr Schneider.

Under the ominous subject heading of “imprisonment and $100,000 fine”, Cr Gaston sets out a chronology of events around the seeking of legal advice leading up to the CEO’s dismissal.

In it, Cr Gaston seeks to allay concerns that the four councillors had done anything wrong in obtaining this legal advice which, Cr Gaston confirms, she instigated in February this year – 12 months after Mr Schneider started in the job.

Cr Gaston’s reassuring email was prompted by phone calls from Cr Herbert that seemingly put the heebies into Cr Owen.

Cr Herbert had warned Cr Owen that, according to separate legal advice, the four councillors could face five years jail and a $100,000 fine for alleged misuse of council funds.

That’s enough to cause a restless night.

“I cannot believe our documented actions could qualify us for a $100,000 fine – from whom I wonder? Nor that any of this would warrant five years imprisonment.

“We followed every step according to the advice we received and at no time did we think we were breaking any laws,” the email says.

The Local Government Inspectorate has since launched an official investigation into the circumstances surrounding the sacking of Mr Schneider.

This investigation includes the four councillors seeking legal advice without a formal resolution of the full council.

In the meantime, Cr Herbert alleged in his sworn affidavit that Cr Gaston attempted to pass a motion at the 13 July meeting that, if successful, would have seen the public pay for the legal advice.

I asked Cr Gaston yesterday for a comment on that allegation, but have not yet received a response.

The council recently confirmed an invoice was received from law firm Maddocks for the legal advice, but was later withdrawn.

As it sits, we have a Supreme Court challenge, a Local Government Inspectorate investigation, a legal threat, and a whole lot of confusion for the rest of us – outside the tent – who are still trying to piece together exactly what went on inside.