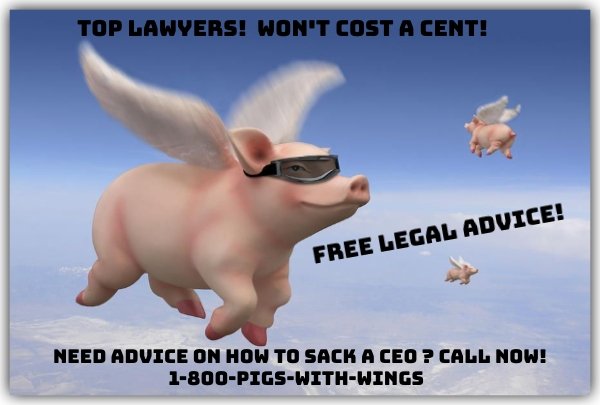 The story behind the axing of the Warrnambool City Council CEO is becoming murkier, with news that the very expensive lawyers involved didn’t charge a cent.

I can tell you the lawyers did in fact charge the council, but then they pulled the bill.

But let’s go back a step.

In one of the most staggering revelations of this whole messy affair, Cr Sue Cassidy told the Standard on Thursday that, “no legal fees were charged by our solicitors” for advice around the dumping of CEO Peter Schneider.

When, in the long history of the esteemed legal profession, have you ever heard of top-class lawyers from Melbourne working for free?

We now know the four councillors involved sought legal advice and didn’t just Google “how to dump a CEO and still get re-elected”.

This was a very serious matter, given they were about to toss the CEO out the door and hand the cost to ratepayers . That cost, so far, is hundreds of thousands of dollars – around $400,000 in fact.

Yet Cr Cassidy tells us the lawyers never charged a cent for what must have been considerable, specialist advice.

Well of course they charged the council – they sent a bill – but there’s a twist.

They later tore it up.

“Council received a bill that was later withdrawn,” a council spokesman told me today via email.

Righto, we are in seriously weird territory.

Why would a law firm invoice the council for legal services, and then withdraw that bill?

I asked that question back to the council.

The council didn’t ask why, the spokesman replied.

A top law firm wipes off a bill for what must have been thousands of dollars worth of work and the council just shrugged?

Nothing makes sense and we are – still – not being told the full story by the council, or the four councillors involved: Crs Neoh, Cassidy, Gaston and Owen.

Instead the story drips out in little dark droplets of detail that we all have to try and piece together.

The former CEO has been gone almost two months and we still don’t have the full picture.

Regardless of why the CEO was dumped (“no reason” is the official reason), this whole thing has been handled appallingly on behalf of the people of Warrnambool who, from my reading, are justifiably angry and embarrassed.

“My question is to the Minister for Local Government and concerns the recent turmoil at Warrnambool City Council and the choice facing voters at the forthcoming October elections.

As the minister knows, the chief municipal inspector has announced an investigation into the sacking of the council’s CEO.

This shoddy backstairs intrigue saw four councillors conspire to seek legal advice behind the backs of their colleagues without spending authorisation and spring the sacking on an otherwise well-regarded CEO whilst simultaneously appointing an existing director to the job.

I welcome this review and thank the minister for his assistance in securing it. On top of this, last December the Victorian Ombudsman began investigating potential credit card fraud at Warrnambool City Council.

The question I have for the minister is: can he ensure that all relevant information from both reports will be released prior to the upcoming local government elections?”

Questions upon questions – and they will keep coming until we get all the answers.

The Terrier telethon is now on! If you would like to support The Terrier, please visit the tip jar.