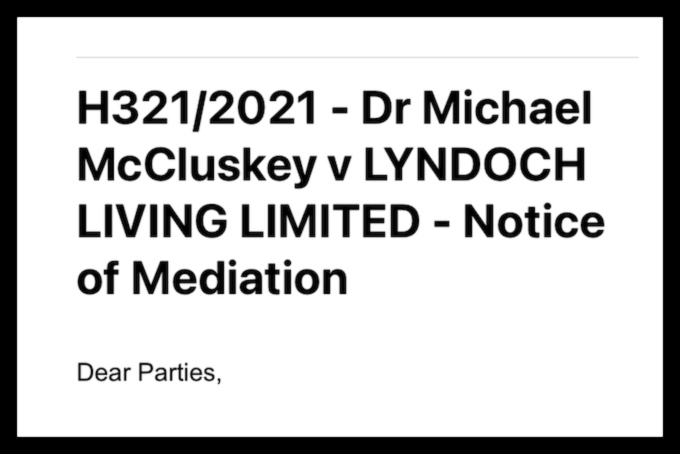 An update: Warrnambool vet Dr Michael McCluskey is marching on with his VCAT challenge against Lyndoch Living and its flat rejection of members from the wider community.

He now has a date.

Following VCAT’s acceptance of Dr McCluskey’s case late last year, a mediation hearing date has now been set for a videoconference on 10 March.

Dr McCluskey is testing whether Lyndoch Living has broken anti-discrimination laws by refusing to accept his membership application on the basis of his name and gender.

He is not the only one.

I – and one other  – also lodged a complaint with VCAT on these same grounds and, just an hour ago, had an email to say the case had been accepted and a mediation hearing will be scheduled in the near future.

Mediation is the first step in the VCAT process.

As we know, the Lyndoch Living membership application form allows only for a name and address.

On this basis – a name and an address – the Lyndoch board has rejected more than 130 applications for membership over the past two years.

As a result, Lyndoch has no general members.

Along the way, it has also failed to explain why it has rejected every application, including those from health professional and academic Prof James Dunbar, Order of Australia recipient Vicki Jellie, senior South West Health care nurse Kate Sloan, former aged care director Janet Dunn and experienced local business people, such as Marie Bird.

A bucket load of applications was also received from everyday people across the community – like me – who care about the future of Lyndoch, which has been a community asset for more than 60 years.

We are not letting go of our input into a much-loved community asset that easily.

Dr McCluskey said he was extremely pleased VCAT had accepted his application.

“Allowing a broad based community representation amongst Lyndoch Living’s membership is of utmost importance in my opinion if we are to see optimal outcomes for the vulnerable and those most at need amongst us,” he said.

Dr McCluskey said he could speak from personal experience about the importance of maintaining a thriving, community-based aged care home, as he was also a carer.

“We are currently providing 24/7 in home care for an elderly family member and that experience has heightened my awareness as to how crucial it is that we have community based aged care centres operating as caring and effectively as possible.”

Aside from his VCAT challenge, Dr McCluskey is preparing to try again with his membership application for Lyndoch.

He hoped the appointment of local consultant Robert Lane to review Lyndoch’s board membership would lead to an opening up of general memberships.

“I am hoping the appointment of an outside consultant will create a fresh ‘set of eyes’ and lead to a wiser mindset within the decision makers at Lyndoch Living,” Dr McCluskey said.

The shutting out of the community from Lyndoch Living is just one thread to this complex story, but it is a critical one.

General memberships are the only bridge between Lyndoch being fully transparent, or remaining a closed shop where the board has total control and the community remains at arm’s length.

I can only come back to the question of why – why would Lyndoch not want general members?

The challenges to VCAT provide some hope of an answer and – perhaps – a change.

Another challenge will be revealed shortly. Watch this space.