Alf Altmann’s attempt to cross Bass Strait solo in a home-made kayak in 1970 is the stuff of legend. Bluestone has pieced together the full story about this Warrnambool man’s brave quest …

The recent Bass Strait crossing by three men on paddleboards has revived memories of an epic feat by Warrnambool’s Alf Altmann, who became the first man to row solo across the same treacherous passage – at the cost of his life.

Precisely 44 years earlier, on the morning of February 25, 1970, Alf set out to do the same perilous journey.

He pushed off in his home-made, 4.5m kayak from Little Mussel Bay, north-east Tasmania, and headed out for what he thought could be up to a two-week journey to Port Albert, Gippsland, depending on the weather.

It was a trip for which Alf, a builder by trade, had meticulously prepared both mentally and physically, and followed many years of experience on the water.

Indeed Alf, who was my uncle, had sailed for 18 years and had crossed Bass Strait eight times before in various motor-powered craft, many of which he built himself.

It was during one of these crossings that his engine failed and he was forced to row his boat to the safety of an island, after which he was so exhausted that he vowed to learn to row properly and promptly joined the Warrnambool Rowing Club upon his return.

Unlike the paddleboarders, who were all aged in their 30s, Alf Altmann was 56 years old – and a grandfather – when he decided to take on rowing across Bass Strait entirely on his own. There would be no support crew or anyone to rush to his aid if he struck trouble.

He also had none of the high-tech, water-resistant, fail-proof navigation and flotation equipment that is now commonplace in marine sports.

Instead, Alf made his own bright-orange kayak from a timber frame and plywood shell, with a 30cm long, 27-kg steel keel and various sealed compartments so that if one area sprung a leak, it would not sink the boat.

His on-board equipment included a small sail and portable mast, a tent, flares, waterproof matches, a sea anchor, a radio transmitter, a compass and a life jacket that, by today’s standards, was more likely to leave you floating face down than face up.

No wonder everyone, including his wife, Isobel, thought he was mad to attempt to cross a stretch of water notorious for its high seas and battering winds.

Alf, however, was used to such scepticism and loved to live on the edge.

When he left from Melbourne in a powerboat to circumnavigate Tasmania in 1968 – a total distance of 1930km – the local fishermen thought he was crazy, but he simply responded: “what challenge is there in retracing common routes?”

Bass Strait is the ultimate challenge, even for those in maxi yachts, let alone a plywood, home-built kayak, but Alf was convinced that his kayak was unsinkable.

“This is a survival boat, not a luxury one,” he told reporters in the days before his departure.

Alf arrived in Burnie, Tasmania, on board a trading ship and made his way with his kayak to the north-east of the state via train and then friendly locals who were prepared to give him a lift to Little Mussel Bay. Isobel, who was home with three of their four sons (the youngest, Philip, was 16), would meet him at the finish.

Once on the high seas, Alf – like the paddleboarders have done since – planned to island hop his way across the strait, from Cape Barren to Flinders, up the coast of Flinders and across to Deal, to Hogan, to Cliffy and then the 45km run home to Port Albert.

And while some of these islands were inhabited, if only by a lighthouse keeper, Alf intended to mostly camp and live off his supply of nuts, dried fruits, honey, powdered milk and special bran biscuits that Isobel always made for him.

It takes a special courage to push off into the ocean knowing that you will be utterly alone at sea, but the first days of Alf’s journey could not have gone more smoothly.

Setting off in beautiful weather, Alf ploughed through the water: far from taking up to two weeks, he was soon on track to make the crossing in a week.

Australians were riveted by the unfolding story as Alf checked in with lighthouse keepers at each island: first one, then another, then another…

It was only when Alf reached Cliffy Island, the last island before home, that the weather began to turn sour. Despite being so tantalisingly close to the finish – so close that Isobel was already waiting on the wharf at Port Albert – Alf was forced to bunk down at the lighthouse for two nights.

The acting lighthouse keeper, Sjoerd Boontra, would later say that Alf, despite having just rowed more than 200km, helped with odd jobs around the lighthouse while itching to get back on to the ocean.

Come the morning of March 6, Alf was determined to start out early for the last 45km of his journey, even though the weather forecast suggested rough conditions for a kayak and Sjoerd urged him to wait.

“His reason for leaving was that he wanted to surprise his wife…who was not expecting him until 3pm,” Sjoerd later recalled.

“It will have to be pretty bad for something to go wrong now,” Alf said.

These were among his final words. A minor storm blew in an hour after he left Cliffy Island, whipping up 25 knot winds and 4m waves.

Alf failed to arrive at Port Albert by his expected time of 11.30am, and the crew of the Marjorie Phyllis, a lighthouse supply boat that was assigned to meet him offshore, began to worry.

By 1pm, the local police launched a full-scale air and land search, with Isobel still holding out hope that he had taken refuge on a scrap of an island.

But at 5.58pm, the Marjorie Phyllis received a crackled radio call from the search plane: “It’s all off”.

Alf’s body, wearing the top half of a two-piece wetsuit and a spray jacket, was spotted less than 2km from Snake Island, part of the Gippsland lakes. His kayak was found nearby, intact, but for the splintered oars: it really was unsinkable.

How Alf came to drown is still not known, but abrasions across his face suggest he capsized and was knocked unconscious by hitting his head, perhaps on one of the oars. From there, it was over. A life packed with determination, daring and adventure had come to an end.

More than 500 people crowded into the Warrnambool Presbyterian Church for Alf’s funeral, where he was described as a man of great courage and a “pilgrim adventurer”.

And Isobel, even within her own grief and that of her sons, Keith, Ken, Philip and Alan, reminded us that Alf would have wanted to die knowing he had pushed the boundaries.

“Where would we be if nobody had taken a risk?” he once told her. 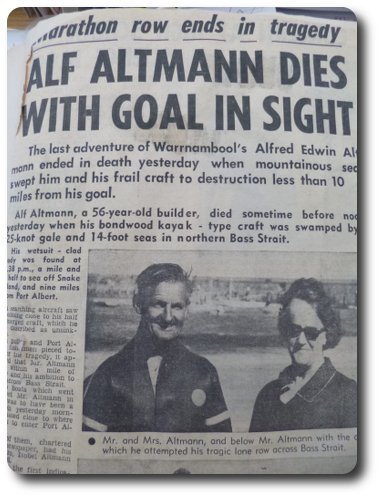 * Bluestone Magazine would like to thank Alan and Philip Altmann for their assistance in researching this story. Other details have come from original media reports and documents housed in the Public Record Office Victoria. Alf’s widow, Isobel, passed away in 2003.