Last week we brought you the full story of Alf Altmann’s ill-fated attempt to row solo from Tasmania to Victoria in 1970. Alf, of Warrnambool, kept notes during his journey and at least a portion of these were found in a waterproof section of his kayak after it was retrieved off the Gippsland Lakes. His son, Alan, transcribed them in 2004. This is the first time they have been published. 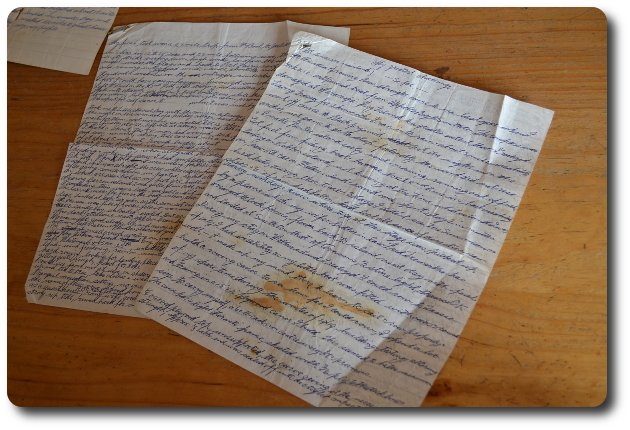 The idea of rowing Bass Strait came to me last year when I took a 10’ outboard powered boat from Apollo Bay to Smithton.

The compass was damaged at Naracoopa, King Island to a greater extent than I realised. Leaving Grassy for 3 Hummocks Is. I ran into rain & about 3 miles visibility went off course to Black Pyramid, put the night in on the anchor, not game to sleep, fortunately the wind did not rise & I made Hunter island early next morning, running out of fuel.

Got fuel from fishing boat & became lost a second time in bad visibility, landing on Robbins island, not knowing at the time which island I was on, (I) saw old car on Walker island and rowed over, spent 2 days in mutton bird huts, during this time – 3 days – I didn’t see the sun, moon or stars & 6” of rain had fallen, had lost all sense of direction.

Saw Stanley (Tasmania) next day and knew where to go, at this stage was picked up by a plane which my wife & brother in law Fred Trewartha had arranged to look for me, flown back to (Robbins) island next day with fuel and landed at Smithton that afternoon, ½ stone light otherwise OK.

During my stay on Walker island I realised I could row to Tassie if only I had visibility, as my little boat was fitted with oars & rowed well.

I made up my mind there to learn to sail & row properly, build a rowing canoe to see how far I could row.

I spent a lot of my spare time during the winter of 1969 building – testing – altering and training in a 15’ by 2’ plywood canoe I built. This seemed to be the minimum size to carry myself, a 60 lb cast iron centre weight & provisions.

The canoe has a light ‘Meranti’ frame, sheeted with 3/16 ply to the deck line & 1/8 curved plywood top, unsupported, the curve giving it the necessary strength. Approx. 1/3 each end was sealed off into airtight compartments to assure floatation with airtight hatches to hold food, clothes & equipment and finally filled with plastic bottles.

I also packed foam floatation in the centre compartment where I rowed, this was fitted with a well, to house the centre-weight, which I bolted in. If the centre-weight was lost in this narrow craft, one would hardly survive at sea. After all this is a survival craft, not a showpiece.

I learnt to sail it, it ran well with the wind and I could do a fair reach with a small sail & jib. To cut down equipment I rigged an extension to an oar for a mast, one could be under sail in about 10 minutes, but this was only to run back if I struck strong head winds.

The idea was to be the first to row Bass Strait.

During tests I found out I could not capsize the craft and it would ride out strong winds & big seas, however it was possible to have it blown over with too much sail, with an unexpected gust.

The rudder fitted keeps the craft on a much more even course, particularly running with fresh winds and big swells. Also set for beam winds to avoid rowing on one oar to keep on course which is tiring.

I purchased a pair of broken teak oars from our rowing club for $1 which when repaired were long enough for my craft. Light & strong!

Only enough clothes to be acceptable when landing & to keep warm. About 2 lb’s of bran biscuits, I have been eating these for 37 years, I must have eaten tons of them by now, a terrific health food, dried fruit, honey, powdered milk, nuts, ‘Granose’ biscuits & water. These are my main foods.

I also carry flour, rice and cheese in case one is stuck on an island, fishing lines to catch fish, can usually get mutton birds this time of year. I carry a survival bag in case I have to leave the boat, this would be the last resort, I would only leave it if I looked like getting washed onto rocks.

In the bag, a complete wet suit, which keeps one afloat and warm. I feel I would always make it to land in one of these, also about 2 days supply of food and water with a knife, and a 30” beach ball which can be blown up to attract attention.

My final test was a 27 mile trip from Warrnambool to Julia Percy island in 7 hours in 12’ to 15’ seas and 25 mile following seas. The canoe took it in it’s stride surfing down high swells, landed on the island, slept the night under the stars and back to Port Fairy the next day in 90° heat and running into head winds & swell, about 14 miles return. I found out a weakness in the outrigger rowlocks, otherwise all OK. I felt I could have gone as far again, however got some chafe on legs from rolling seat.

Left Warrnambool on the 23rd of February, after studying our weather for years feel from late Feb. into March – we get our best conditions while the days are still reasonably long & warm.

Put the canoe on the ‘Empress’ & got a cabin, arrived at Burnie and got train transport for self and canoe to (illegible), where I was met by Jim Petrio of Gladstone who took me to Little Mussel Bay with the canoe on a trailer, unloaded near beach & slept waiting the night on the verandah of a holiday cottage.

Hard bed, little sleep, TV asked me to wait for them next morning, so waited till 12, and was about to go when I heard a shout, the TV man had arrived, took film for 10 to 15 minutes, got away, good seas, no wind, strong tide carried me a mile or two to west before I got out of it about 5 miles out.

Rowed briskly, about (illegible) miles to go, late start, about ½ way to Barren Island, my first stop, saw some big fishing  boat which swung my way, he swung in a wide arc following and finally blew his whistle for me to slow down.  When alongside the ‘Skipper’ asked me where I was heading & when he saw I had completely stripped he said only 2 words ‘Oh God’.

When I told him I was making for Cape Barren island he appeared concerned & asked if I was alright, the crew were eagerly hanging over the side having a good look. After some directions we parted, rowed all day in the raw, only sand shoes on which are essential as my feet are built in to give power on the rolling seat.

Nearing Barren island 2 seagulls flew over, one turned back & had a second look, I concluding this was a lady seagull and it was time I put clothes back on. The less one wears the freer the body moves, also my swimming trucks where chaffing my legs.

Landed at Cape Sir John as the sun set, only about 3 miles from the settlement, but as the sea was full of rocks felt it was unsafe to go any later, pulled canoe up in nice sandy bay, unloaded and erected tent as fast as possible in sheltered scrub. Now dark, ate some nuts, apples & bran biscuits & honey, drink of water & off to bed. Warm night, good sleep.

Getting quite rough, head for Cape (illegible), finally land at Pine scrubs near a road I could see from out at sea on sheltered beach, easy to land, no breakers, pull canoe up and tie to tree, take clothes & walk up road, over hill. See large home in beautiful tranquil mountain setting, no one home, so sunbake.

Mr. & Mrs Syd Millyard of Leeka, the name of this area, arrived home about 6 p.m., had been shopping, they ran home as a guesthouse. ABC rang for news, rang wife, good nights rest, left for Kelliecrankie at 8-15, thru a strong rip tide, rowed hard for some 20 minutes and got thru, was baling out, looked up and found out I was being swept back at about 4 knots almost back into tidal rip, around Cape Frankland, almost hit sunken rock, it suddenly uncovered about 8’ away.

Good run along coast with some wind assistance to Killiecrankie, children waiting on beach, a very pretty sheltered little bay. Met Alf Stackhouse & wife, also local people, very friendly. Alf had full knowledge of all the islands & landing place right thru to the mainland. Also had his private plane, stayed the night with them. ABC reporters rang up.

Decided to miss Craggy island after seeing it and discussing it with Alf. Stayed the night with them, no sleep, thinking of 38 mile (illegible), hadn’t been this far before, arranged with Alf to fly over about 4p.m.

Set alarm for 3 a.m., in water at 3-20 a.m., can see Deal (Island) light flashing & head for it. Conditions good, slight side winds off Craggy island at 7 a.m., pleased with progress.

Winds freshening, thinking what have I done to deserve this, pray for good conditions.

Postscript: The notes finish about half way through Alf’s journey which came to a fatal end on March 6, 1970, just 2km from the Gippsland Lakes. Before his death, Alf was already plotting his next adventure: to row from mainland Australia to Papua New Guinea.