Tonight I can reveal that a group of Lyndoch staff tried to alert the Lyndoch board to a looming staff crisis more than a year ago, but was ignored.

An explosive letter has emerged that was written by a group of experienced staff to the Lyndoch board on 2 April 2020 – 18 months ago.

The letter was delivered to the board via a trusted intermediary, a Warrnambool GP.

Staff are forbidden under Lyndoch policy to approach the board directly, but the authors, who represented a cross-section of Lyndoch, clearly felt they had no choice.

“It is with grave concern that we feel compelled to formally address the Board of Directors of Lyndoch Living,” the letter begins.

“Our knowledge that this direct communication may lead to employment termination must also demonstrate the gravity of our actions and the reason we undertake this anonymously,” it says.

Between them, the letter says, the authors have more than 50 years experience in aged care and they came with a warning:

“Over the last four years we have seen a significant deterioration of staff morale, and poor and highly detrimental decision making…,” they write.

“This has resulted in a very poor culture, significant stress and distress among staff, sick leave and resignations”.

Let’s just stop there for a moment.

I wish I could publish the entire letter, but Lyndoch is too litigious for me to take that risk, so what follows is my edited version of what the authors outline as their issues of major concern, the alleged causes and the request for action. 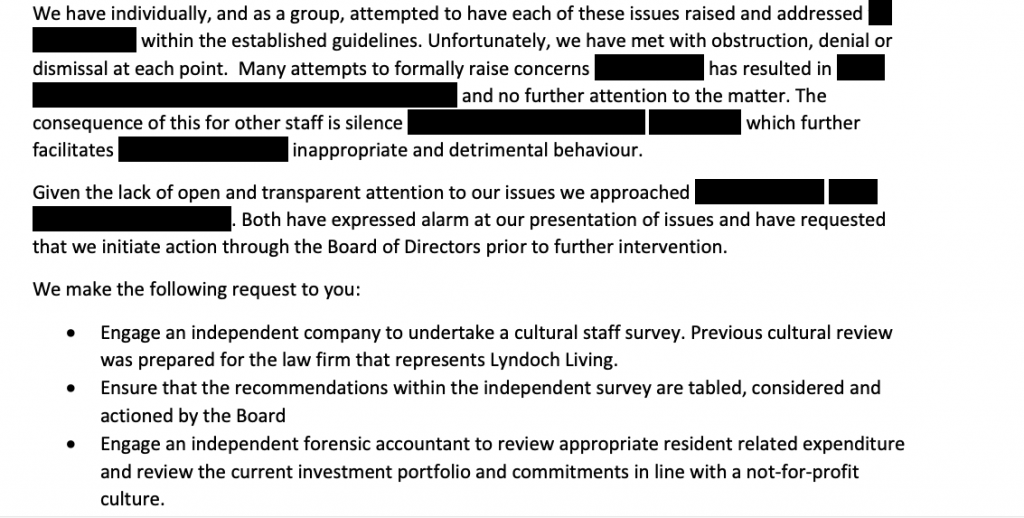 The staff tell the board that they tried to raise their concerns through the normal channels, but have got nowhere.

In fact the situation only got worse.

“Unfortunately we have met with obstruction, denial or dismissal at each point,” they write.

Either a lack of action or consequences for speaking up, meant other staff remained silent, which led to more “inappropriate and detrimental behaviour”.

The authors say they turned to two politicians for help who were alarmed by their claims and urged the staff to contact the board directly.

So they did, via a letter that could not be more direct.

They urged the board to do a “fearless review” of Lyndoch Living that would include three things:

1. Engage an independent company to undertake a cultural staff survey. (The) previous cultural review was prepared for the law firm that represents Lyndoch Living.

2. Ensure that the recommendations within the independent survey are tabled, considered and actioned by the Board;

3. Engage an independent forensic accountant to review appropriate resident related expenditure and review the current investment portfolio and commitments in line with a not-for-profit culture.

And at the end of the letter came the kicker.

The authors offered to meet with the board, to show their faces, and to step away from anonymity.

They would do this, they said, provided they could be protected from any threat to their jobs, and assured confidentiality.

Anybody who knows a Lyndoch worker who wants to speak up, but doesn’t, knows that the number one reason given is fear of being targeted, or losing their job.

The courageous staff behind this letter swallowed that fear because they believed if they did nothing, the situation would only deteriorate.

They decided to trust the board.

So they wrote their letter, they had it delivered via the GP and they waited for a response via the same intermediary.

They didn’t get a reply, much less an invitation to come and talk with the board in confidence.

I know the board received the letter and I know it was discussed, but it went no further.

The board stayed silent.

And the brave staff, their hearts swollen with disbelief and disappointment, felt that they were entirely on their own. They retreated back into the shadows and got on with caring for the elderly and vulnerable residents of Lyndoch.

I don’t know what has happened to the staff who wrote this letter, but their predicted catastrophe has come to pass.

The steady loss of experienced and dedicated staff from right across Lyndoch over the past five years has, in recent weeks, become a flood.

And still the board says, and does, nothing.

* Board members Percy Eccles and Suzanne Coulson resigned in March and May of this year. They have not been replaced.

1 thought on “Lyndoch board ignored staff warnings on looming crisis”