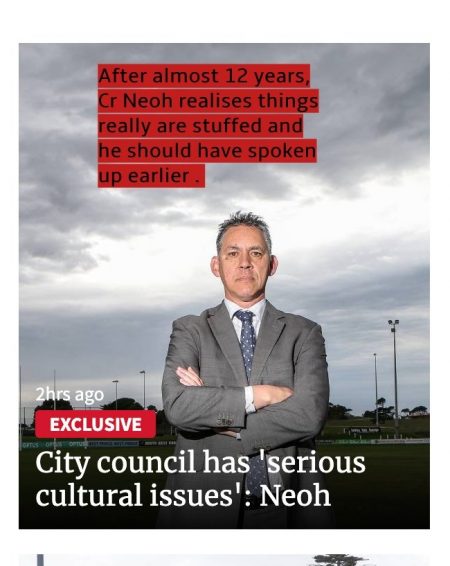 Well this has to stick in your craw.

Cr Mike Neoh is riding in on his silver horse having realised – just 8 months out from an election – that things are broken at the WCC.

You are spot on there, Cr Neoh, but what did you do in the past five years to change that culture of which you now speak?

The bullies that have made life hell for some people in council didn’t arrive last week.

They were employed by the previous CEO.

It started years ago, under the previous CEO.

False and misleading council reports -especially around things like Flagstaff Hill and the Aquazone – have been an issue for years. (I know, because I have been writing about it!)

That appalling “good bloke” culture that suffocated so many good people has thrived unquestioned for years.

You – and the other senior councillors – didn’t inherit this shite, you were right there, watching, as it all unfolded.

So while I am absolutely overjoyed that AT LAST the councillors have decided to listen to the staff who have been suffering for so long, it is disingenuous to act surprised.

The alarm bells have been ringing and, like him or not, Cr Peter Hulin was one of the chief bellringers.

The new CEO Peter Schneider, unfortunately, has not lived up to expectations and certainly not built bridges or healed the wounds.

Given Cr Neoh’s public declaration today, I suspect Mr Schneider is now a dead man walking. He will probably be gone within six months.

But he must not be the only one.

A clean out of all the dysfunction is necessary and that must come not only in the next few weeks, but also in October.

(Photo from The Warrnambool Standard home page, with my words added at the top. You can read Rachael Houlihan’s exclusive story here: https://www.standard.net.au/…/city-council-has-serious-cu…/…)