One of Warrnambool’s most enduring mysteries has been the identity of the “Granny” buried at Granny’s Grave high in the sand hills of Lady Bay and now, more than 165 years after her death, she is to finally have due recognition.

The Warrnambool City Council will add a plaque to the grave site by the end of June that will correct a long-standing error that named “Granny” as Mrs James Raddleston – the name inscribed on the headstone – and confirm that she was in fact Agnes Ruttleton.

Very little was known about Agnes Ruttleton beyond the perfunctory details etched into her headstone that told us she died in 1848 and was the “first white woman buried in Warrnambool” which at that time was still part of NSW.

Bluestone, however, has pulled together the threads uncovered by various researchers to tell her full story.

We began with a bunch of history books and a visit to the Warrnambool & District Historical Society that holds a thin manila folder on Granny’s Grave which contains the bare bones of her life and identity.

The books and clippings reveal that Agnes and her husband – who was incorrectly named as a James Raddleston –  lived in a tent somewhere near Flagstaff Hill in 1847-48 and eked out an existence through odd jobs and selling crayfish. At that time, Warrnambool was just a speck, with the first land sales having been held in 1847 and its population at around 100.

Among the first people to buy land was Richard Osburne, the newspaper publisher and historian, who at the age of 22 bought a block on the corner of Kelp and Merri streets not far from where Agnes and James were living. Richard knew Agnes as “Granny”, probably because of her age (more on that later) and, it appears, became quite emotionally attached to the “old” woman.

When Agnes died in 1848, Osburne is named among a group of men who organised for a coffin and a funeral service to be held at a burial spot in the isolated dunes, as Warrnambool did not yet have a cemetery. A fence was built around her grave but years of scarifying wind, rain and shifting sands saw the fence – and entire gravesite – eventually disappear from view.

Indeed Osburne was mortified when he returned to Warrnambool in 1886 and despite “walking and walking” he was unable to find Granny Raddleston’s final resting place.

“I tired myself from the search,” he wrote in a letter to the local paper.

Osburne used his letter to implore the council to erect a proper headstone in honour of one of Warrnambool’s pioneering women, but nothing was done for almost another 20 years when, in 1904, a group of citizens raised funds for the bluestone headstone that stands today.

(In the intervening years, an anonymous resident used a piece from the 1888 wreck of the Edinburgh to mark Granny’s Grave – perhaps as a subtle hint for the council to hurry up.)

When the headstone was finally unveiled, it had Agnes reduced to “Mrs James Raddleston”, a person who did not technically exist, although it was not uncommon for name spellings to be mangled through either mis-spellings, poor handwriting or mispronunciation. Raddleston had been recorded as Rittleton, Ruttleton and Raddlestone.

And this is where Jenny Fawcett, from Warrnambool, comes in.

To call Jenny an amateur historian is a gross understatement: she is researcher unlike any other we have met before. Jenny has devoted hours of her time, driven by personal passion rather than profit, researching the history and characters of the south-west Victorian coast.

Her files are extraordinary, and her recall of individual details and events is mind-boggling.

It is Jenny who has reached back through time to find that Agnes Raddleston is Agnes Ruttleton and, in so doing, uncovered how James and Agnes came to be in Warrnambool.

“I like unravelling the mystery behind an individual, and Granny’s Grave is one of those stories that just had to be unravelled,” she said.

Through meticulous searching of convict records, Jenny traced James Ruttleton as an English boatman who was sentenced to 14 years for stealing and transported to Australia in 1820 – first to NSW, and later, after escaping, to Hobart Town. He was 31 years old.

After a variety of indiscretions, James was finally granted his Certificate of Freedom in 1834 and settled into a life in Tasmania.

Somewhere along the way, he met Agnes. Jenny has not been able to uncover her maiden name, or whether she was a convict too, but there is no record of James ever marrying.

“Maybe they were already married when he was sentenced and she joined him in Australia later, which could happen, or perhaps they were never married at all,” Jenny said.

What we do know, thanks to Jenny’s research, is that the pair sailed from Tasmania to Port Fairy on board the Essington in November 1846 and are listed as James and Agnes Ruttleton.

Both were then aged in their late 50s, but Jenny believes James may have been lured by the opportunity of better work. The Geelong and Portland Bay Immigration Society – which included Port Fairy – was keen to bring in labour.

It appears the new opportunity didn’t quite work out, however, with James and Agnes living in virtual poverty for their final years.

Agnes was also not the first white woman to die in the area.

Landholder John Allan (from Allansford fame), lost his first wife Jemima in 1842 and buried her on an island in the Hopkins River. There were most likely other deaths among the original sealers and settlers.

Agnes was, however, perhaps the first white woman to be buried in the newly proclaimed area of Warrnambool.

James Ruttleton died three years after Agnes, on June 15, 1851, and is buried in the Port Fairy cemetery…his death certificate incorrectly names him as John.

While Warrnambool’s infamous “Pioneers Board” (now housed in the library) doesn’t include any female pioneers among its faces, the Granny’s Grave plaque will recognise at least one of the many brave women who ventured to what was then nothing more than a tiny settlement behind the sand dunes. 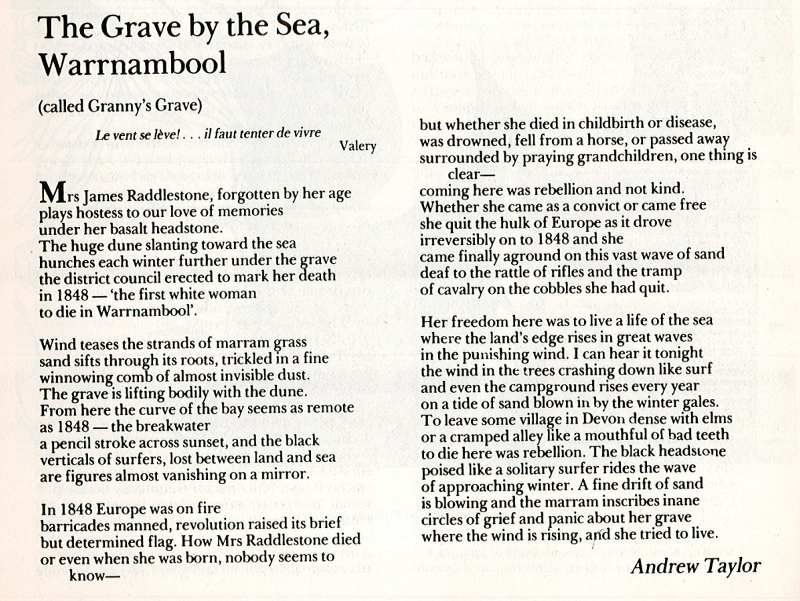 In researching this story, we uncovered a rare and beautiful poem about Granny’s Grave by Professor Andrew Taylor, who was born in Warrnambool. The Grave by the Sea, Warrnambool was first published in Quadrant Magazine in March 1981. Prof Taylor has kindly granted us permission to reprint his poem in full here. We would also like to thank Dr Simon Cooper for his efforts in finding a copy of the poem that, being written pre-computers, Prof  Taylor did not even have. He does now!

7 thoughts on “Who is the ‘Granny’ behind Granny’s Grave?”