And so it comes to a close.

Four years after the current Warrnambool City councillors were elected promising unity, transparency, positivity – and a bunch of other things that end in ‘y’ – they will hold their final public meeting tomorrow night (Monday 7/9) as a divided mess that has failed dismally to live up to that promise.

Ratepayers have not been told the truth about many things over these past four years – but the sudden dumping of the former CEO, Peter Schneider, is the Godzilla of the piece.

It is the mother-of-all finales to what has been four years of secrets and spin and it has split the council, because there is only so much bullshite one council can absorb, even when still smiling for Zoom.

As we limp toward the October election, we must demand the truth on this whole Schneider affair, because we are paying for it.

We want evidence of the claim, for example, that the CEO was failing to deliver on the council’s 2040 plan. 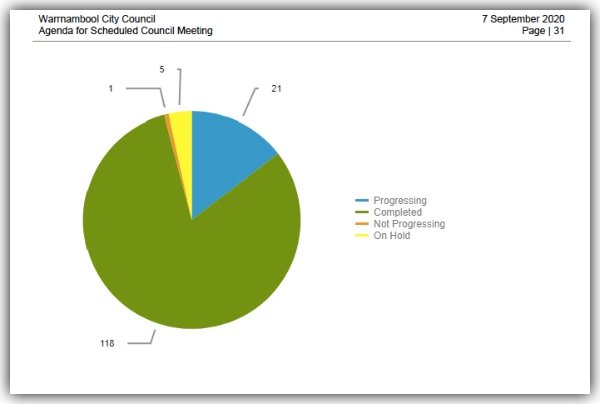 As it happens, tomorrow night’s hefty agenda contains a little coloured graph that shows an update on council “activities and initiatives” between April and June this year (see above).

and only one is not progressing.

This, of course, is at a time when Covid-19 had thrown the world into chaos.

Those figures don’t look like a failure to me, but more like council staff getting stuff done.

So what is the truth? Was the CEO making progress or not?

And, as I wrote on Friday, we have the wobbly story around the thousands of dollars in legal fees that were racked up by the four councillors who plotted the CEO’s demise.

Ratepayers were expected to pay for this legal bill, before it was torn up and the advice was suddenly pro bono (free).

Why was it free?

Cr Mike Neoh told the Standard on Friday that he believed there was a problem with the invoice.

A council spokesman told me on Friday that the council didn’t ask why.

How does Cr Neoh know what happened if the council officers don’t?

What is the truth of the matter?

Is the root of it, as MP Bev McArthur told Parliament last week, that the councillors had no authority to hire the lawyers in the first place?

But planning for this coup started in February: Crs Gaston, Neoh and Owen were already making their moves.

They had begun to talk to people. Phone calls were being made. They just needed one more councillor to come on board.

That was in February – well before the results of the surveys were known.

On top of this, once Cr Cassidy signed on and the axe could be swung on 13 July, dozens of WCC staff swamped councillors with emails of support for the CEO.

So what is the truth?

Was the former CEO a friend or foe of the staff who hoped to see a better council than the one he inherited, which was wracked for years with allegations of bullying, ignoring staff surveys, favouritism, and a “mates club” mentality?

It’s a sweet irony that the council’s final meeting contains the annual report which opens with this:

“WCC is committed to transparent reporting and accountability to the community.”

Given the state of play, we can only take this as humour as the lights fade on this sorry chapter and we prepare to write a new one.