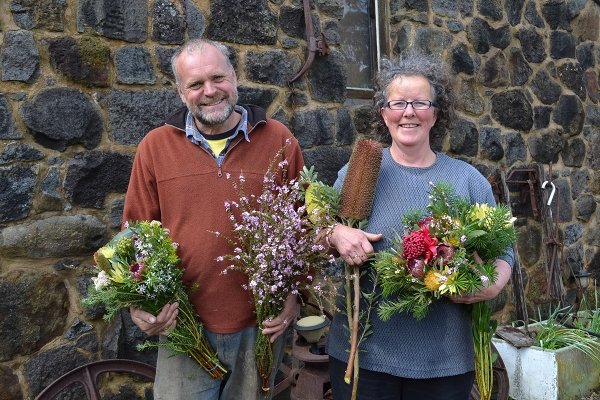 [dropcap style=”font-size: 60px; color: #A5CECD;”] A [/dropcap]NDY and Debbie Doeven live the kind of life that most people only fantasise about while staring out the window from their desk job.

It has been more than 20 years since the pair decided to uproot from suburban Melbourne and start afresh – from the ground up – on 21 acres of scrubby land at Naringal, east of Warrnambool.

“When we first came here, this land was covered in blackberries and weeds and that was about it,” Andy said.

It is a far cry from that today, with the couple and their two sons using most of the land to grow magnificent native and South African flowers for their cut flower business.

Hazelnuts, chestnuts and walnuts have also recently been added to the farm.

[dropcap style=”font-size: 60px; color: #A5CECD;”] I [/dropcap]T IS PERHAPS not surprising that Andy had previously worked at a Safeway supermarket as the fresh produce manager, until the recession Australia had to have drove profit margins down and personal stress levels up.

The pair decided it was time for a lifestyle change and found the Naringal land on a real estate board in Warrnambool while on their way to visit Andy’s brother in Portland.

“We actually were thinking about Snake Gully (near Ballarat), but when we saw this, we thought it had a lot of potential for a good price,” Andy said.

The family started from scratch; living in a shed on the property for “several years” while they built their mudbrick and bluestone home by hand, using the clay soil dug from the building site.

They salvaged and recycled second-hand materials where possible, including buying used equipment to set up their own solar electricity system.

They still remain entirely off the grid and use a wood stove to heat water in winter.

[dropcap style=”font-size: 60px; color: #A5CECD;”] I [/dropcap]T HAS BEEN LONG, hard, tiring work that has taken many years to complete, but now they enjoy an enviable lifestyle sustained by much of their own produce, including free-range eggs, at least some milk from a house cow and, perhaps, some pork from the pigs that one of their sons has begun to breed.

It is a very physical lifestyle that keeps them both looking little different, one imagines, than when they first met at a disco as teenagers.

After building what has been a shared dream, they can’t imagine ever returning to a city lifestyle.

“No, impossible,” said Debbie with a laugh.

[box] Doeven Flowers can be found at the Port Fairy farmers market (third Saturday of the month) and Warrnambool Showground market (each Sunday).[/box]

Life as a sole sister: a cobbler with Rauert’s shoes

Rob Sharrock and his sexy Vespa