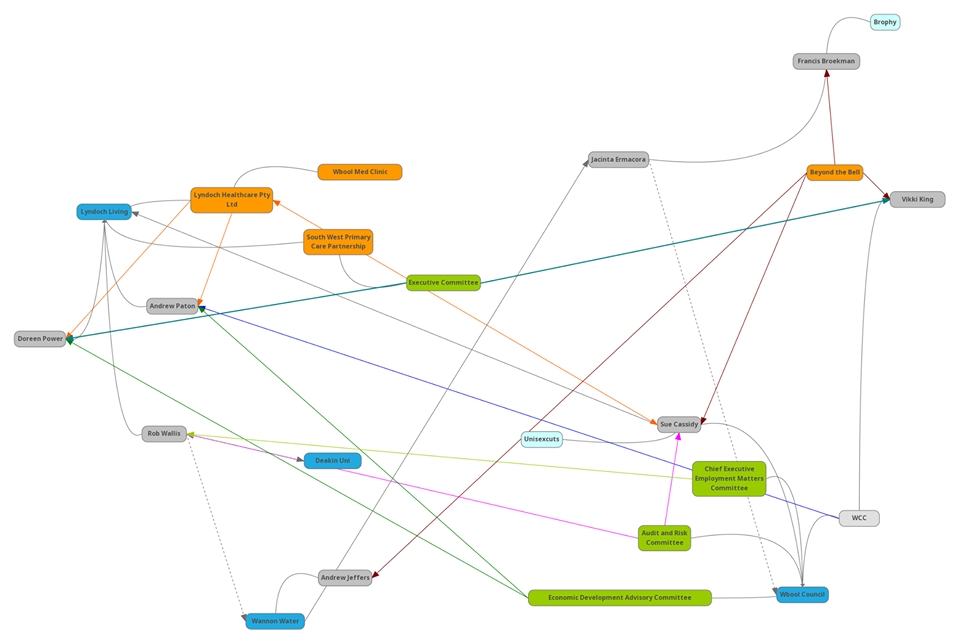 Tight knit: I had plans to write today about the W’bool City Council election campaign being in full swing – it started with the knifing of the CEO and has gathered full strength now that Cr Mike “The Real Chief” Neoh starts popping up in the paper with all manner of either un-costed, outlandish or recycled ideas from years ago…..BUT…..

It’s a visual map put together by a reader showing a tiny corner of the spider web that operates in Warrnambool between our public boards, public institutions and authorities.

It’s the same map I sketched out in words last week on this page.

Wow! It looks like an FBI crime map, where the victim is Warrnambool, strangled by the thin, tight cord of mutually beneficial connections.

And this is only the merest skim across the surface of the ties between Lyndoch Living and WCC.

It doesn’t even touch on many of the most sought after boards and executive spots including the Warrnambool Racing Club, MPower, South-West TAFE, South West Healthcare, Wannon Water, Brophy, Regional Development Australia Barwon South West, Leadership Great South Coast, the Liberal Party, the Labor Party and all of the various partnerships, hook ups and cross fertilisation that happens behind the scenes.

Boiling steadily beneath the surface is a soup of new names and old, both well-known and less so, like Anson, McKenna, Philpott, Gaston, Ermacora, Rule, Waterhouse, Power, Nelson, Lane, Lee-Ack, Broekman, Cassidy, Boyle, Jeffers, Neoh, Wallis…around and around and around we go.

I will pluck out just one as an example: Steven Waterhouse. I don’t know Steven Waterhouse, but according to Linkedin he is General Manager at Wannon Water, Chair of South West TAFE, and Deputy Chair Warrnambool Racing Club. That’s a trifecta!

I am sure many regional cities could draw a similar map, but is it a good thing, or is it stifling? Is it mentoring, or is it controlling? Is it about maintaining power or sharing it?

All of these questions are swirling around my head as we prepare to vote for our next council.

This election, more than ever, is a chance for change at least within one public institution – a chance to break the mould. A fresh start, with fresh names, who you will come to know in coming weeks.

It is going to take a lot of hard work for these faces to bust through: to garner even a small corner of the thousands of dollars of free publicity that Cr Neoh, for example, has enjoyed for his recycled ideas, but I am hoping they can do it.

I don’t want someone on council who will have been there 20 years. That’s unhealthy in any democracy.

And I don’t want someone who is the puppet of someone else. That’s also unhealthy in any democracy.

If we want change, we are going to have work hard for it. I am ready and I hope you are too.