Oh, the tangled web. Warrnambool can be a very, very small place when it comes to who knows who, and who ends up where, how, and why.

Which is why I asked Lyndoch Living this week how it manages the potential conflicts of interest around Lyndoch board member and now Lyndoch chair, Sue Cassidy.

I asked this because Ms Cassidy, who joined the Lyndoch board in 2017, is married to David Cassidy who operates Cassign: a very successful signage company that has operated in Warrnambool since 1983.

Cassign has done a lot of signage for Lyndoch Living these past few years, including the Lyndoch bus and the new signage at the Warrnambool Medical Clinic that, last year, was bought by Lyndoch Living for $1.3 million.

Cassign also provided the installation work for the swish flat-screen TV that now sits at the drive-through entrance to Lyndoch Living.

Most recently, as I understand it, Cassign replaced old signage outside the new Swinton Wing with a sparkling new sign that, among other things, directs people to the “Lyndoch Medical Hub”.

I know more than I probably need to know about Cassign, because I have raised the issue of potential conflict of interest before, when Ms Cassidy was a Warrnambool City Councillor and voted on issues to do with racehorse training on our local beaches.

At that time, I questioned how Ms Cassidy could be part of any such discussions when Cassign sponsored horse races in Warrnambool. 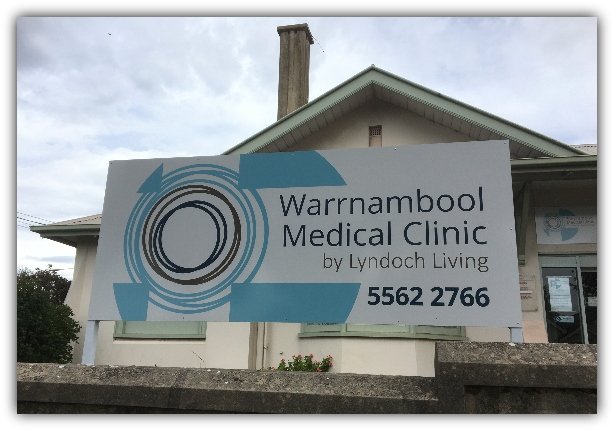 In response, Mr Cassidy sent me a series of long and passionate emails setting out why – in essence – my stories were all a crock and there was no potential conflict of interest and his wife was a modern woman who ran her own business, while he ran his.

I saw it differently – and I still do. Which brings me back to Lyndoch Living.

This week I  asked Lyndoch Living (and Ms Cassidy) whether Lyndoch put out a tender for its signage work and, given Cassign has done at least some of this work to date, how it managed any perceived conflicts of interest.

The answer, as always, was no answer.

We shall have to make up our own minds.

In the meantime, you may recall that a couple of weeks ago I wrote a piece about Lyndoch looking for yet another senior executive to add to its ballooning executive team which has grown from 37 in 2017 to almost 60 in 2019.

This newly created position – Director of Research, Enterprise and Education – was worth more than $100k a year, was advertised only internally and for only around 10 days, leading me to speculate that someone was already lined up for the job.

That someone, I took a punt, was Julie Bertram, a retired director from South-West TAFE, who this year has been filling a maternity leave position in the Lyndoch executive.

Lo and behold, guess who today was announced as the winning candidate for the job? Ms Bertram.

While Ms Bertram is no doubt perfect for the role, the bigger question is why Lyndoch’s executive team seems to have an ever-increasing number of new staff in roles that, between them, must cost a fortune.

For what purpose and for what return to Lyndoch and its residents?

This latest position comes on the heels of Lyndoch recording a $1.9 million deficit – its fifth deficit in five years.

It also comes amid unconfirmed reports that Lyndoch’s at-home gardening staff will soon be dismissed because they are costing Lyndoch money.

And it comes as we start the countdown to Lyndoch’s full financial figures for 2020 being released in January through the Australian Charities and Not for Profit Commission.

I wonder if the food bill for Lyndoch will have increased from the paltry average of $13 per resident, per day, in 2019?

The silence from Lyndoch is always deafening when it comes to my questions, but rest assured that I will keep asking.

As always, if you would like to support the work of The Terrier, please visit the tip jar.