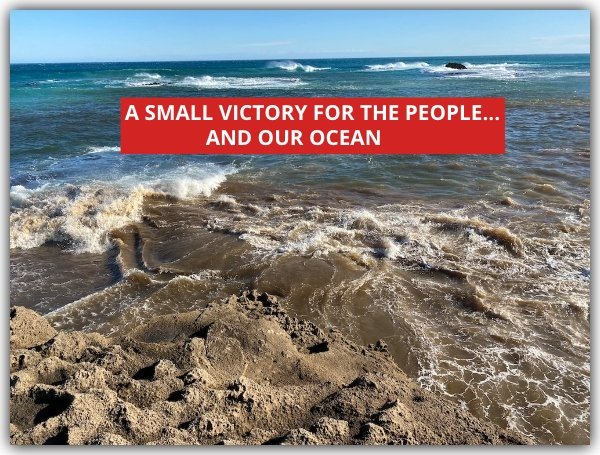 Happy news: I am supposed to be taking a break…but there has been a breakthrough with the fight to stop Wannon Water’s plans to continue to pour effluent into our ocean off Thunder Point for the next 20 years.

Before this $40m, more-of-the-same project goes any further, the EPA has asked WW to provide a whole raft of extra, expert detail on, among other things:

1. Public Health Concerns, including assessing pathogens in the wastewater and the impact of humans being exposed to these bacteria and viruses in the ocean, including through seafood.

2. A health risk assessment of the ‘dirty decants’ (like that pictured) where solids and untreated waste water are released into the ocean.

4. Treatment process concerns, including the dirty decants that the EPA agrees have happened “multiple times in the past two years” and how these will be prevented.

5. Preventing the discharge of microplastics and;

6. Responding to each of the 83 public submissions received on this proposal, of which 78 were against the plan as it stood.

The fight is not over, but my word, this is a victory for the voices and for Colleen Hughson’s bravery in the face of immense corporate pressure, and for all of those people who took the time and effort to say ‘not good enough’ to Wannon Water.

We care about our ocean and we don’t want some cheap option that “will do” for the next 20 years.

Industry needs to sort out its own pollution and not expect to use Thunder Point as a dumping ground, or they should pay more toward making sure this is a first class/tertiary treatment plant that disposes only clean water into the sea.

Our kids and grandkids will thank us for this fight.

I am feeling happy tonight.

You can read the EPA document in full here.

(If you haven’t watched the community video yet, tonight is the night. Most people have/had no idea what is happening out there near Shelly Beach, but they do now.)