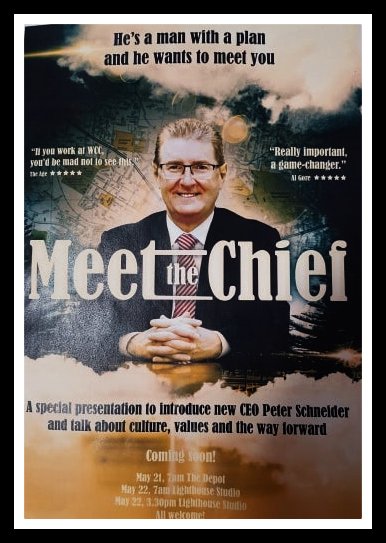 It’s 12 months since the Warrnambool City Council started a new chapter under a new CEO, but still it staggers under the weight of the old regime that is pulling the place apart.

As I write, I have just heard from solid sources that two high-level staff have taken leave amid allegations of bullying.

Other senior staff  have taken sick leave or unexplained leave, including the head of governance who has not been seen for months.

Over the past six months, staff have continued to resign, paying tribute to their workmates, but saying they can no longer deal with the workplace culture and a lack of leadership.

One senior staffer who left put it this way in a letter to colleagues: “I urge you to stick to your values, call out things that are not in line with the organisation’s values and most importantly, be kind to each other.”

The elected council, meanwhile, remains riven with deep rivalries that pit the Cr Gaston/Neoh faction against the Cr Hulin/Cassidy/sometimes Herbert faction, in a bitter struggle which is circular and exhausting.

To be frank, despite the polite smiles in the council chamber, most of the time they want to rip each other’s heads off.

Whistleblowers have been isolated and the CEO’s supposed “open-door” policy remains blocked by gatekeepers, so staff  are reluctant or unable to step through.

Even the CEO is kept in the dark, having allegedly not been briefed about the looming credit card scandal until June last year, which is when the scandal broke publicly.

In that environment, faith is broken and people learn to just shut up and get on with it.

I say all this being fully aware – and grateful – that the council is full of decent, solid, hard-working, loyal people who give their absolute best to Warrnambool as true servants of the public and they make up the vast majority of council staff.

But the fact is the new CEO, Peter Schneider, inherited a shite sandwich which he has been unable to turn around.

Just three months before Mr Schneider started, the results of an independent staff survey leaked into the public domain and it was not a pretty picture.

It found that since 2014, the council had gone backward on every key measure, including leadership, people, customer focus, and strategy and planning.

Most telling was that while 71 per cent of all staff said they felt proud to work at the council, only 51 per cent said they looked forward to coming to work each day.

In one department, only 39 per cent enjoyed coming to work each day.

That is not a sign of a happy place, but a place where good people keep hanging in there, hoping things will get better.

They haven’t – I have seen resignation letters and spoken to some of those who have left – and they won’t until three things happen:

a full, open and independent assessment of the workplace culture with a commitment to act on the results;

an end to the bunker mentality by being open and honest with the public;

a changing of the guard at the next council elections in October.

Without these, I fear that the WCC will continue to lumber along like a bus on broken wheels, wondering why it’s losing all of its passengers.

11 thoughts on “Breaking down: WCC staggers under the weight of old ways”