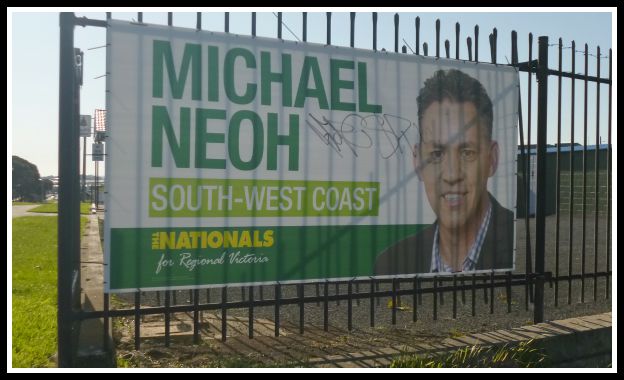 It is a question that has been swirling around Warrnambool for a fortnight – now that Mayor Michael Neoh has been preselected to run for the National Party, why is he still Mayor?

It is more than two weeks since Mr Neoh switched parties from the Liberals to the Nationals so that he had a clear run at the October 31 by-election for South West Coast without having to endure a potentially bruising preselection battle inside the Liberal Party.

In that one move Mr Neoh revealed many things, not least that – like any politician in the making – he will use whatever political advantage he can to boost his chances of election, even if it means swapping parties.

His refusal to step aside from his role as Mayor is another such move.

For no matter how you look at it, staying in the mayoral role for as long as possible is all about gaining a political advantage.

By wearing both hats, as a mayor and as a National’s candidate, Michael Neoh doubles his public profile.

It also means Mr Neoh – as Mayor – has access to opportunities and information that would not be available to him as just a member of the public.

I am not suggesting Michael Neoh has improperly used these opportunities for his own political gain, but the fact is that when he now attends any public event, he is seen as both the mayor (not the former mayor) and the Nationals candidate.

It also means when he reads any council documents, attends any briefings, or receives any other information as Mayor, he has to be disciplined enough not to let it have any influence on his election campaign.

Again, I am not suggesting Michael Neoh has been anything but disciplined in this regard, but the potential conflict of interest looms large.

No wonder the Municipal Association of Victoria (MAV) describes the “politicisation” of local councils from councillors running for state or federal parliament as a “contentious” issue.

When Mr Neoh was first nominated by the Nationals on Sept 10, he said he would take leave when the election date was set (the issuing of the writ).

The election date was announced 10 days later on Sept 17, but, in the meantime, it appears Mr Neoh ran a magnifying glass over the rules and found he could stretch his time in the chair even longer.

The MAV says, as a minimum (not a maximum), a councillor running for Parliament should take leave when the electoral commission is formally notified of their candidacy. The last date for this to happen is October 2.

Again, in a smart political move, Mr Neoh is applying the bare minimum of what is required and will stay on for as long as possible to gain maximum exposure during the by-election campaign.

We did ask Mr Neoh, via email, if he was using any of his mayoral time, allowance, car or mobile phone for his campaigning. We also asked about the potential conflicts of interest as outlined above.

This was his response:

“I have a campaign car that I use and also non council equipment.

I am following the MAV policy in regards to taking leave of absence and I do not use mayoral invited functions to campaign.

If I meet with stakeholders outside of Council duties and as a candidate I make it very clear that I am an election candidate and are not representing council.”

The boundaries, in Mr Neoh’s eyes, are very clear. But I know they are far less clear to the general public, many of whom are asking why he has not “done the right thing” and stepped aside.

Guidelines are just that – guidelines – and it is up to the individual to decide whether they wish to follow them to the letter, or embrace the spirit of their intent.

Bluestone also asked Mr Neoh, straight up, why he was staying on as mayor until the final hour.

We have not yet received an answer.

8 thoughts on “Why WCC Mayor Neoh should step aside”