[dropcap style=”color: #a5cecd;”]T[/dropcap]he Warrnambool City Council is being sued for negligence over the death of a young man at an Allansford rail crossing in 2013.

You can read the Supreme Court writ here.

For those of you who may have missed our Facebook post from earlier this week, we followed up on a report in the Herald-Sun by Tom Minear that revealed the council and V-Line are being sued by Colin Grant, the father of Sam Grant, the 22-year-old tragically killed at an Allansford level crossing in March 2013.

Mr Grant is taking action against both parties for failing to improve safety at the Brown St crossing. 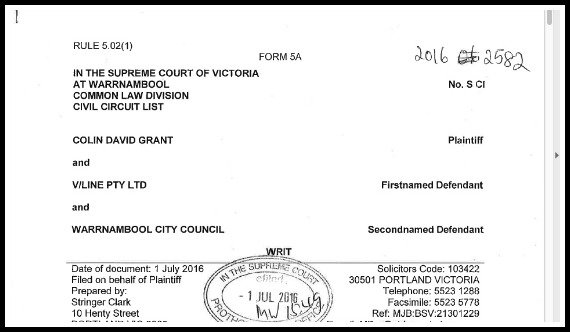 [dropcap style=”color: #a5cecd;”] T [/dropcap]he writ lodged in the Supreme Court on July 1 on behalf of Mr Grant claims that the council had “the responsibility, management and control of Brown St, including the approaches to the crossing”.

It further argues that the WCC had a duty of care with respect to its “management, control and supervision of Brown St and the approaches to the crossing”.

In particular, the writ outlines five areas of negligence:

The WCC told Bluestone on July 18 it had “not received any notification of this court action” – despite the writ being lodged with the Supreme Court almost three weeks ago.

According to the writ, the council has 10 days after being served with the writ to “file an appearance”. Update: A writ can be served up to 12 months after it is lodged with the court.

We shall keep an eye on this timely story as it unfolds.

Tightening the tap on council leaks

A $4 million Loch Ard peacock, but who has the key?

6 thoughts on “WCC being sued over train crossing death”