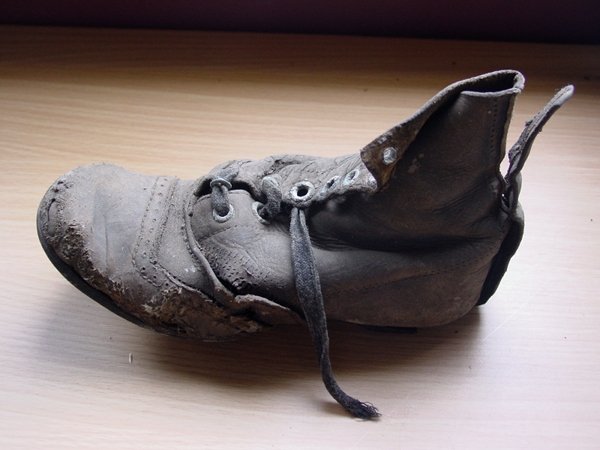 [box] Bluestone Magazine recently brought you the story of the rejuvenation of 222 Timor St, Warrnambool. This week, we tell the story of one fascinating find during its restoration.[/box]

[dropcap style=”font-size: 60px; color: #A99E90;”] O [/dropcap]ld shoes, perhaps more than any other item of clothing, have the power to tell stories.

What is the story behind a single shoe discarded by the roadside? Did it land there by accident, through misfortune, or part of prank?

We throw old shoes over powerlines and tie them to wedding cars, and we refer to shoes in our folklore and our fairytales: “if the shoe fits, wear it”; Cinderella and the famous glass slipper.

Old shoes are personal. They hold an imprint – a literal footprint – of their owner that cannot be replicated and makes them so hard to throw away, especially when they were once worn by a loved one who has also gone.

Some shoes can outlive us, surviving for centuries beneath the dirt and rubble of demolished homes and ruined cities until they are at last unearthed by new activity.

[dropcap style=”font-size: 60px; color: #A99E90;”] A [/dropcap] shoe that had been hidden for possibly more than 70 years was recently found at my grandmother’s former property at 222 Timor St, Warrnambool, opposite Swinton’s supermarket. It was the house in which my mother spent a large part of her childhood.

It is also one of the oldest commercial buildings in Warrnambool and is believed to have been built around 1850.

As we wrote about earlier this month, the building recently passed into new hands and its long-hidden secrets are being slowly uncovered: a hidden doorway down to the cellar, shoebox-size windows that had been boarded up and wallpapered over, and a child’s single leather boot that had been placed under the floorboards.

The boot is about 18cm long, with tacks around its sole and seven pairs of metal eyelets securing a cloth shoelace.

[dropcap style=”font-size: 60px; color: #A99E90;”] I [/dropcap] thought it might have belonged to my now 89-year-old mother, but when I showed her the boot, she suggested it had most likely been hidden under the floorboards by a boot repairer – a Mr Long – who had rented part of the property from her father in the 1930s.

My mother told me she had read an article in the Reader’s Digest about shoe superstitions, including the placing of a shoe under floorboards for good luck. I couldn’t trace the Reader’s Digest article, but an online article by British shoe historian June Swann confirmed that in Britain, in particular, it was not uncommon for a shoe to be hidden somewhere in a house to bring stability and good luck to the household.

Hiding a child’s shoe – in either a wall, chimney or under the floorboards – was also believed to increase fertility.

Perhaps Mr Long, if he did hide the boot, hoped it would bring prosperity to his business. Or perhaps it wasn’t Mr Long at all, but a previous owner of 222 Timor St who stowed the boot away for good luck.

The full story is yet to be revealed and the boot, of course, is holding its tongue.

[box] A version of this story first appeared in the Warrnambool & District Historical Society newsletter, Warnimble, April 2013. The new owners of 222 Timor St, Luke and Nat Taylor, plan to hide one of their children’s shoes in the restored building…for good luck. [/box]

5 thoughts on “Secrets of an old shoe”