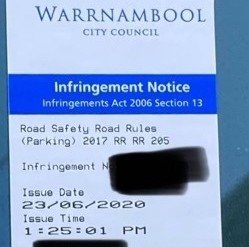 Have you received one of these lately? A parking fine for the ‘free parking’ in Warrnambool?

If so, you’re not alone.

That’s because the free parking in response to C19 was always free TIMED parking, but the W’bool City Council didn’t enforce the time limits.

For about two months, the parking inspectors were nowhere to be seen.

So most people assumed it was free parking, full stop.

Now that the time limits are suddenly being enforced – largely because some unthinking souls decided to park all day in front of shops – people are being whacked with fines left, right and centre.

As one person who contacted me after being fined said, “I thought it was free parking? Did I miss something?”

What they missed was the clear message that free, timed parking would now be enforced.

(This means if you park in a two-hour car park, for example, you get two hours free. If you stay longer than two hours, you may get fined.)

If ever there was an example of why the W’bool City Council has received such a disastrous result in the last community satisfaction survey, this is it.

Two of the areas that matter most to residents, according to that survey, is good communication and getting the city’s parking right.

So I am here to help spread the word that free, TIMED parking is in force and it’s great. I hope it stays.

I hope the only place where you don’t get at least the first hour free is Liebig St, where perhaps it’s the first 30mins.

Traders have been begging the council for years to offer some form of free parking. Now, more than ever, they need that help – permanently.

Just this one move alone would, I suspect, see the council move from an F to at least a B in next year’s satisfaction survey.

As it stands, the free, timed parking is due to end on 1 July.