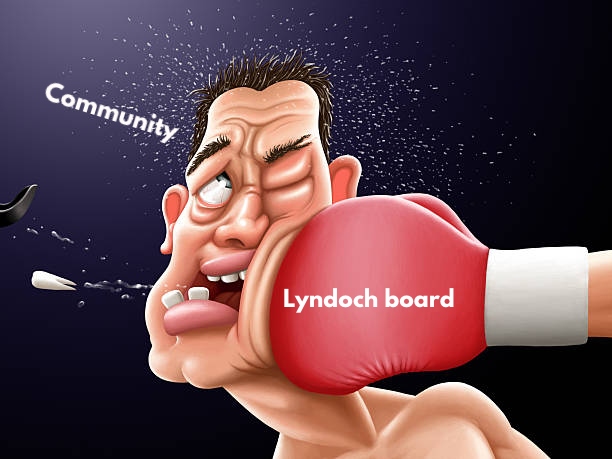 The Lyndoch Living board – metaphorically speaking – slammed MP Roma Britnell at its meeting on Tuesday night but, in so doing, exposed its contempt for the community she serves.

Ms Britnell asked board chair Sue Cassidy if she, Roma, could address the meeting. She could.

As I understand it, there was also a guarantee that Ms Britnell would have a chance to speak to the board openly and confidentially (in camera), without the CEO in the room.

Ms Britnell, armed with concerns from her constituents, arrived to find there was no ‘in camera’ meeting and if she had something to say, she would say it to the board and the CEO.

Things did not go well.

The board pounced and – metaphorically speaking – sent her packing.

Ms Cassidy, of course, has form on this sort of thing.

Yesterday, ironically, it was two years to the day since Ms Cassidy, as a one-term Warrnambool City Councillor, conspired with Crs Kylie Gaston, Mike Neoh and David Owen and threw the CEO Peter Schneider out the door.

Ms Cassidy, Ms Gaston and their two former colleagues are all still under active investigation by the Local Government Inspectorate for that act of bastardry, which resulted in an expensive and ugly court battle for Warrnambool ratepayers and a victory for Mr Schneider.

One of Mr Schneider’s senior employees, City Manager Andrew Paton, is on the Lyndoch board: the board which – metaphorically speaking – has just beaten up our local state MP behind the shelter sheds. That connection must be getting awkward.

On Tuesday night “from 5.35pm to 5.50pm” – as recorded in the board’s autopsy report posted to the Lyndoch Facebook page – Ms Britnell had a first-hand taste of what so many others have endured from Lyndoch’s hierarchy these past five years.

The bodies are piled high.

All of those experienced staff who have been cast out, had their reputations trashed, and been blamed for Lyndoch’s failings.

All of the families, who have tentatively tried to speak up, only to be bullied back into silence.

And the residents who have tried to raise concerns, including one recently who was effectively told they could always move elsewhere if they weren’t happy.

And now it’s our turn. The community is the enemy. We are the problem.

The person elected to represent this community took our concerns right to the heart of Lyndoch and got nowhere.

There will be no greater transparency.

We will not be allowed to become members of Lyndoch Living.

Lyndoch is no longer ours, but theirs.

Rather than listen to the people, the board is too busy congratulating itself for passing re-accreditation while Lyndoch remains in breach of multiple aged care standards across the nursing home, hostel and May Noonan. What a terrific system.

But the community isn’t stupid. We know a Captain Ahab when we see one and the board may wish to cast its eyes back to Seymour Health in 2012 to see how it ends: CEO gone, board gone.

It took the good people of Seymour seven years to win their bruising battle.

We’re up to year seven, and we’re right in the thick of it.

Punches are flying, teeth are being knocked out, eyes are blackened, but I can tell you this:

We’re not giving up.

2 thoughts on “Lyndoch Living board cuts itself further from community”