Some time ago, a young Warrnambool lawyer who likes to crunch the numbers told me that our council was big, fat and bloated with an unsustainable salary bill for a city this size.

More recently, there has been a steady stream of people, all women, contacting me to say the council had turned into a dispiriting boys’ club, despite more women on the ground.

Having taken a closer look, I believe they are both right.

Let’s start with the bloat.

There are 731 people working at Warrnambool City Council (full time, part time and casual) and last financial year the cost to ratepayers was $31.5 million.

At the same time, the council collected $31.05 million in rates (not counting the $4.7 million waste management fee, which goes directly to providing a garbage service).

Look closely at those two figures again and you will see that every single dollar collected in rates  – $31.05 million – is equivalent to the amount needed to cover the cost of the staffing bill of $31.5 million.

This financial year, the gap will widen.

WCC staff costs will jump by another couple of million to $33.2 million and rates, meanwhile, will bring in $31.97 million, which would actually not cover the bill.

With a cap on rates, something needs to give, and perhaps the first place to look is in the upper deck, where the salary packages are lucrative compared to those working at the grassroots.

According to figures given by the council to a parliamentary inquiry into rate capping, in 2016 the council had 21 senior officers each earning a total salary package of more than $120,000 a year – that equates to more than $2300 a week (before tax and including super, etc).

When I asked the council if it still had 21 senior officers earning a total salary package of more than $120,000 a year, it was hard to get a straight answer.

Instead, it provided a convoluted response about the intricacies of the Local Government Act and a list that shows only seven senior council staff now earn a package of more than $130,000 a year, including the CEO and someone who does not report directly to the CEO, but who earns a sweet package of $145,000. (Who could that be?)

I am not sure where the other 15 staff have disappeared to, but I suspect they are still earning more than $120,000, and I suspect they are among the 22 senior people listed in the council’s “organisational structure” on its website, although I don’t know this for sure.

I can confidently say, however, that the vast majority of these big earners are not women, which brings us to the second point about the council becoming a boys’ club.

Leaving aside broader and worrying allegations that I have been receiving about how the boys’ club operates – I will save that for another day – I am going to focus simply on the numbers.

Check out the chart below: 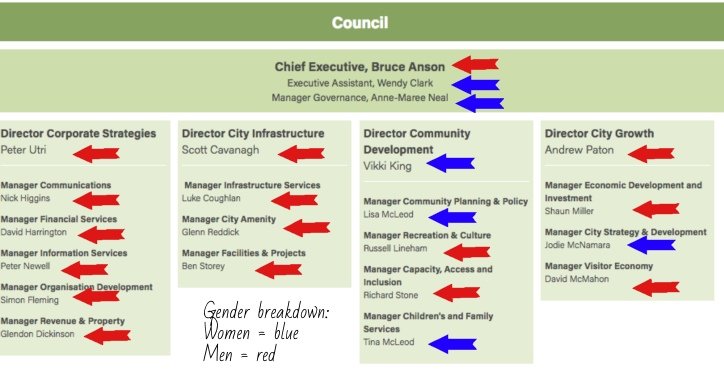 As you can see, there are only six women in the council upper ranks, and only one, Community Development head Vikki King, holds a director position.

Two departments – Corporate Strategies and City Infrastructure – don’t have any senior women at all and City Growth has just one.

But wait, the council will say, we have more women than men on staff, which is absolutely true. There are 497 women, but only 227 full-time equivalent (45%), which means the majority are casual and part-time.

As we all know by now, just having women around doesn’t make a place gender equal.

What really matters is what the women do, the positions they hold, and the influence they can wield (just ask the Federal Liberal Party) and, on this score, our council is seriously lacking.

If you are interested in transparency within government, visit The Guardian’s new The Transparency Project, which is exactly what journalism used to be about and can continue to be, thanks to donations, crowdfunding and partnerships rather than paywalls.

If you would like to support local, independent journalism, please consider making a contribution below. Thankyou to all of you who have already done so.