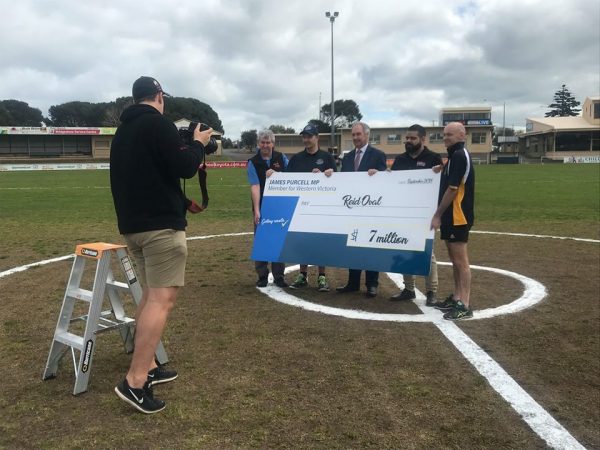 Is Labor backing Independent James Purcell to win this seat at the next election and not its own candidate in Kylie Gaston?

Why else would Premier Daniel Andrews give Mr Purcell a giant free kick in allowing him to announce $7 million for the Reid Oval upgrade in Warrnambool?

I am going out on a limb here, but in all my years of political reporting, I never saw – *ever* – a government miss a chance to announce big bucks for an electorate in the run up to an election.

And yet Labor hand-balled, pardon the pun, the opportunity straight to Mr Purcell who ran with it – of course – and kicked a major goal by giving the local paper the “exclusive” right on the eve of the Hampden League Grand Final.

Weeks earlier, Mr Purcell had promised he could get the funding by the footy final and – voila – he did!

I smell a plot, which has only thickened.

The Premier’s dept confirmed today that yes, Mr Purcell had been told about the funding first because “he had campaigned hard locally on the issue”.

They knew “he would probably go public” with the news before they did, but they didn’t seem overly fussed by this.

Wow! What a kick in the proverbials for their own candidate, Ms Gaston!

Mr Purcell, as he has said before, is still thinking about whether to move from the Upper House to the Lower House for the next election. (He has to decide by November 8.)

I reckon the $7 million smackeroos just about seals the deal, which is why Labor is jumping on board.

After all, if Mr Purcell wins the seat, they will have him all buttered up before he arrives.

Mr Purcell will be a vote they can count on – obviously – much more than sitting Liberal MP Roma Britnell.

For Labor, it is almost as good as winning this safe ol’ Liberal seat in the south-west.

And Mr Purcell has shown he likes the power that being a key independent MP can bring. He may not have that same power in the Upper House after the next election – how boring – so why not have a crack at the Lower?

Need more proof? He has even opened an electorate office in Portland, for heaven’s sake!

And let’s be frank, Mr Purcell, who presents like a Liberal and is all tied up with the racing industry, will attract a lot of votes from the conservative side.

When he first ran for the Lower House in 2010, he drew almost 12% of the primary vote, despite being up against Liberal mega-star Dr Denis Napthine.

This time around Mr Purcell has a bigger public profile, a much more vulnerable sitting member in Ms Britnell and now – thanks to the Andrews’ Government – some serious runs on the board in delivering what he says he will deliver, be it funds for a footy oval, or racehorse training on beaches.

If he pulls it all off, Ms Britnell will look like a Melbourne player wondering what in the heck just happened.

1 thought on “Free kick: Is Labor backing Purcell over its own candidate?”