The first was taken around 1pm last Thursday 24 June and posted to Instagram by building company Nicholson Construction.

It shows members of the Lyndoch Living executive and board whooping for joy at the turning of the first sod for the $22 million medical clinic to be built on site as of this week.

Nicholson Construction is building the clinic, which as we know, despite being a $22 million project, was not put to tender.

Instead, Nicholson was appointed automatically, having previously built the $13 million Swinton Wing extension.

The second photo captures a message sent from within Lyndoch less than three hours later. 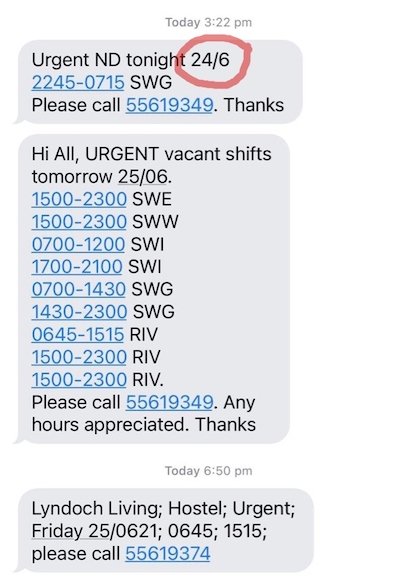 They needed help to cover not one, but 12 shifts across Swinton Wing and elsewhere. Twelve.

I don’t think Lyndoch’s nursing staff were whooping for joy.

Like them, I find it hard to celebrate the turning of the first sod on a $22 million clinic that has no discernible benefit to the  vulnerable and frail residents.

This is the reality of life for so many staff at Lyndoch who are either run off their feet, or stressed out, and it’s a reality that I have been reporting on for two years.

In that time, I have watched the slow wearing down and silencing of the voices who dare to question or challenge this reality.

But there is only so much you can silence.

The consequences of these staffing issues were made brutally clear by the aged care watchdog in its report which Lyndoch perhaps hoped we would never see.

As was first reported here, the Aged Care Quality and Safety Commission spoke of residents in pain, a resident chemically constrained without consent, of falls, of wounds, and of the staff mix being “inadequate” to care for residents.

The commission was not whooping for joy.

And yet the horrors within this report have been all but buried under the first sod of the medical clinic.

This clinic will soak up millions and millions of dollars from Lyndoch and make not one squat of difference to the daily lives of residents living just 200m away.

This is why we must keep pressing on, in the face of mounting pressure to shut up, to stop being a spoil sport and, instead, whoop for joy.

I will whoop for joy one day: when we have all the answers to all the questions and Lyndoch is once again fully accountable to the community it serves.