Warrnambool vet Dr Michael McCluskey has secured a significant first step in challenging Lyndoch Living’s refusal to allow him to become a member, with VCAT accepting his case.

As reported here in early October, Dr McCluskey lodged a complaint with VCAT arguing that the decision by the Lyndoch board to reject his application was discriminatory and illegal under the Victorian Equal Opportunity Act.

VCAT (Victorian Civil and Administrative Tribunal) has since formally responded to Dr McCluskey to confirm his case has been assessed and accepted.

According to Dr McCluskey, the tribunal has also notified Lyndoch Living about its decision to hear the case.

Dr McCluskey says he has indicated to VCAT and Lyndoch Living that he is happy to attend a mediation session as the first listing of the matter.

At this stage, Dr McCluskey will attend the first listing without legal representation, which underscores the David v Goliath fight ahead, as Lyndoch Living has access to top Melbourne lawyers, K&L Gates, for its legal battles.

Once again, I am astonished that I have to write the words “legal battle” between Lyndoch and the community.

But as we know, Dr McCluskey is among more than 120 people who have had their membership applications knocked back by the Lyndoch board in the past 18 months.

Under its Constitution both past and present, Lyndoch has had the power to do this.

Never, however, has it used that power with such blunt force.

At no time has the gate been closed so firmly by Lyndoch against the community that created it. Even our local MPs can’t get straight answers as to why.

The mounting concerns around Lyndoch Living that have been exposed by this page have always been two-fold:

the loss of so many experienced staff and the decline in care to the point where Lyndoch is now, for the first time, failing national standards;

the shutting out of the community from becoming members or board members.

I see these two issues as being closely related.

The first issue – staff resignations and standards of care – is now in the hands of the federal authorities and they have the power to act.

We are all waiting to see what they do and if Lyndoch Living will face sanctions before its reaccreditation falls due next February. 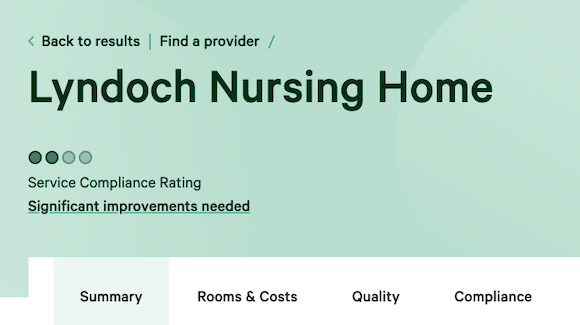 At the moment, the Lyndoch nursing home is ranked two out of four stars and in need of “significant improvement”.

I often wonder how many members of the Lyndoch board or executive would feel comfortable having their loved ones in the care of a nursing home that has dropped to two out of four stars, unlike any other aged care home in Warrnambool?

The second issue – the shutting out of the community – well, this is our issue to fix.

Lyndoch can only be stolen from under our noses if we don’t push back.

Dr McCluskey is among all of those pushing back and while he may be the “David” in the battle ahead, he has a big slice of the community right behind him.